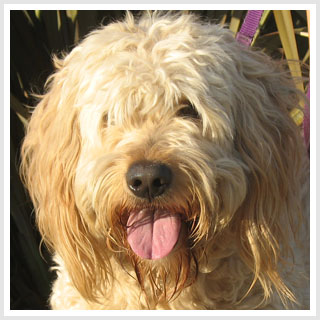 It was love at first sight for us, but since we really were not looking to add a 4th dog to our household we tried to find someone to adopt Clancy.  I posted him on websites and sent e-mails to all my friends.

We waited a week but no one came forward to adopt this cutest of doodles so we adopted him ourselves.  Clancy, Ned and our old sweet lab-mix, Simon immediately settled any differences and became fast friends.  It took longer for Clancy and our Springer to settle their differences, but after a few months all was fine and peaceful.

We took Clancy to training and have continued to learn new things about our chunky dood.  Of course, when the Walk-Around-The-Park came around the next March, we attended and walked our dogs.  People oohed and ahhed over our gang, especially our rescue boy.  We had many people offer to take Clancy off our hands since we had several dogs!  A day late and a dollar short, we told them 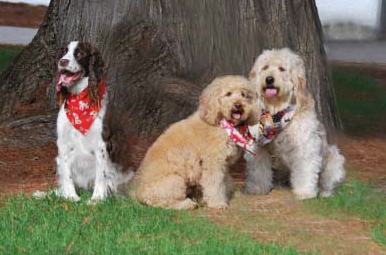 This is the picture taken of our boys at Clancy's first adoptaversary.

March rolled around this year and we got ready for Ned and Clancy's fourth birthdays.  Of course we were going to celebrate with the Pet Adoption Walk-Around-The-Park which was scheduled for March 17 - the boys very birthday. In honor of this, we ordered special Irish leashes from KANGARUA! 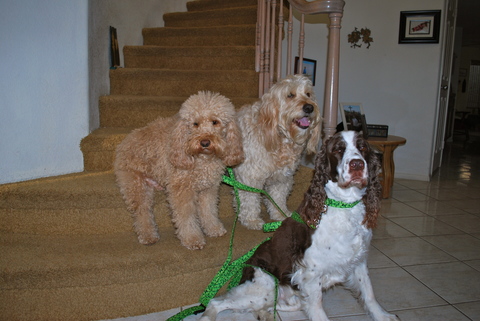 However, sadly the weather did not cooperate and it was pouring so the event was cancelled.  The boys were very disappointed.

Good News!  The event was rescheduled for May 19th.  Obviously, the boys could NOT wear their special St. Paddy finery so I contacted Dori and she made us beach-worthy leashes.  This time however due to my stupidity in experimenting with cutting the boys short, I was able to also get them collars to match!  Since Ned and Clancy's cousins, LeRoi and Sam would be celebrating with them, Dori made them summery collars and leashes also. Colorful stripes that remind one of beach umbrellas. 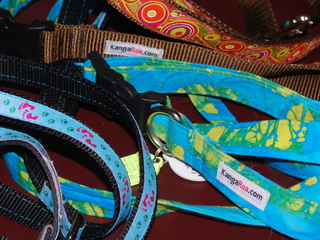 Look at our fabulous fabrics!  Ned has the little hang ten footprints which is perfect for Ned's dancing feet; Clancy has the tie-dye (Dori told us the fabric pattern is actually a peace sign) which is perfect for his calm, surfer dood image.  And Gordie has the retro curves and swirls - just right for a springy, groovin' doodle  dog Springer.

Finally the big day arrived and our guys went in style.  As ever, the boys were oohed and ahhed over!  Surprisingly a young woman came up and gave Clancy a huge hug. She remembered Buck Clancy from his first walk two years ago because she was the volunteer walking him.  She said she was also at the shelter when we adopted him.  I was surprised that she still remembered him, but Clancy really is one of those dogs who get noticed. We call him our Disney dog. 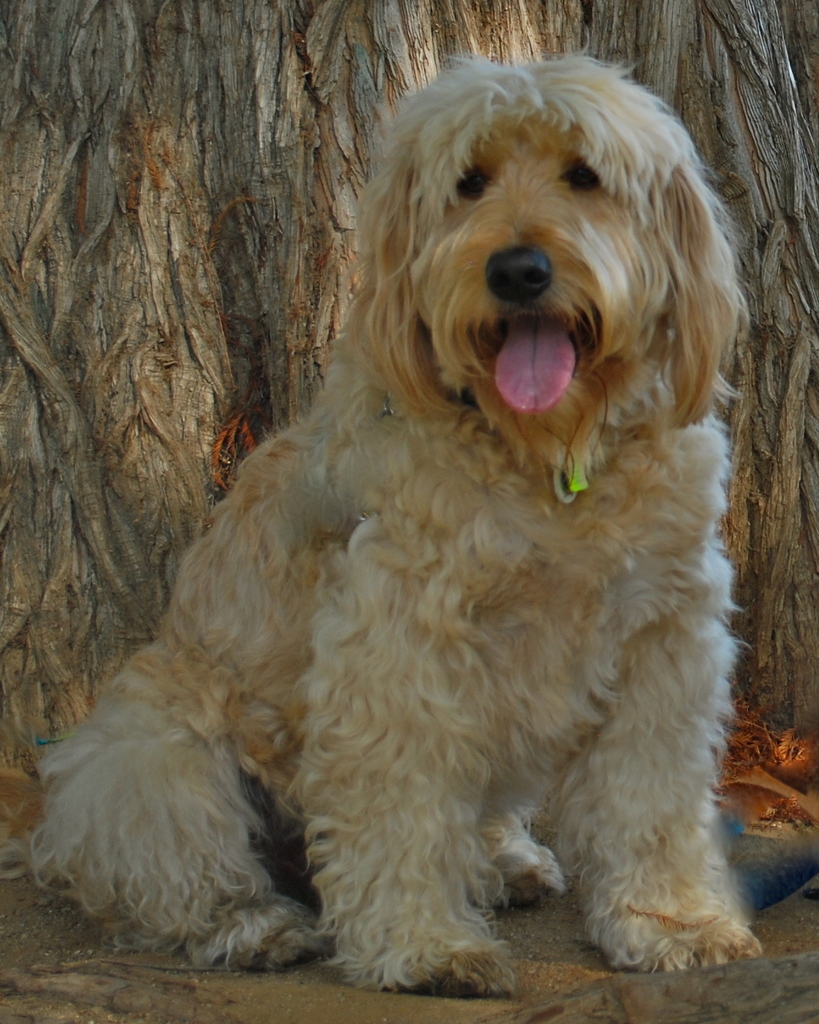 We are so lucky to have our chunky guy! And I think he feels the same way about us.  Definitely a match made in Irish heaven.  March is just the best month - even if it happens in May. Happy Adoptaversary Clancy!!!  I just noticed that Clancy has a tongue smiling face in every picture, how cute.  Such a great story, Nancy.

What a happy story.  I actually like the chunks myself. :-)

Many more celebrations are in your future!

Clancy - you are one good looking dood even if mom says your chunky.  I am glad you were not adopted by anyone else while you were waiting for your mom to make up her mind:)  From another chunky doodle in Virginia.....are you part of the green bean club too like I am???

Thank you. We were sooooo lucky that no one else claimed Clancy.

Happy Adoptaversary, Clancy! You sure are one lucky Irish doodle!