A rocky road to a happy ending

For 2 years my DH and I had been proud owners of a mini labradoodle named Cubbie, then I started to get the “itch” to add another doodle to the family.  I had always wanted to adopt a dog and was thrilled when I came across the Petfinder post about a dog that was being rehomed through the Doodle Rescue Collective.  I applied, we were approved, and so began our journey down one very rocky road… 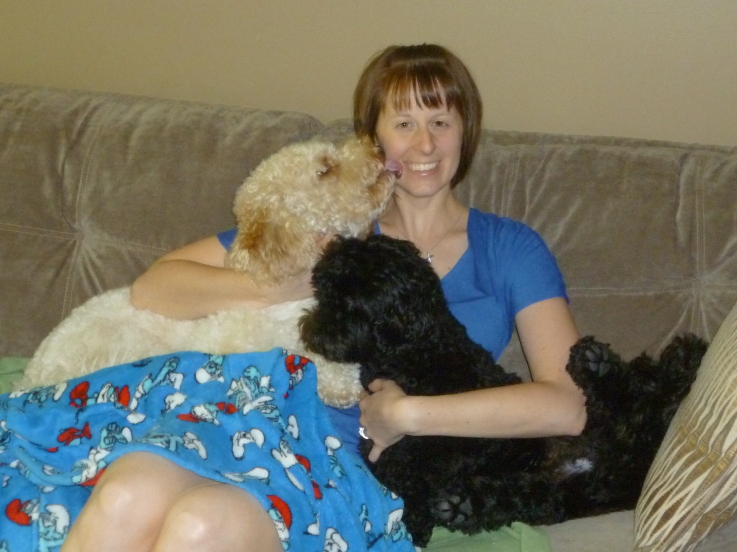 Cubbie loved to go to doggie daycare and play with all the other dogs. Ollie came from a family that had two other dogs. 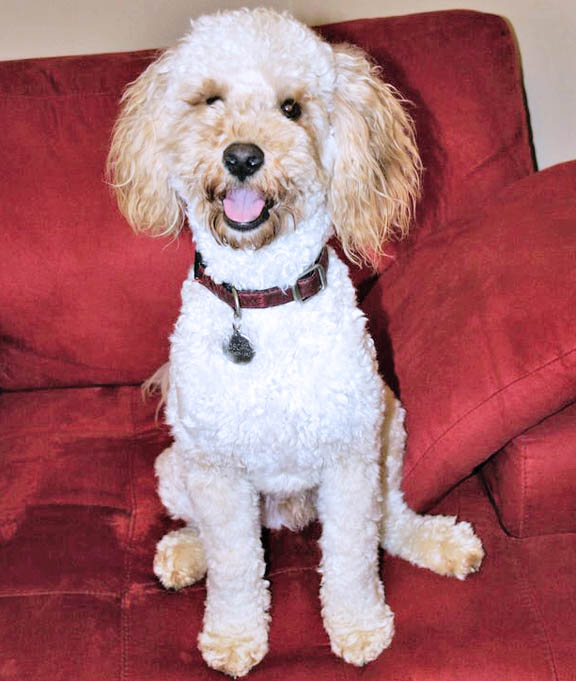 Both dogs are close in size and close in age.

Should work out just fine, right?  Wrong!  I thought I had done my research and felt ready to bring a new dog into our home, but I was not prepared for what actually happened.

Cubbie wanted to play with Ollie but Ollie wanted nothing to do with him.  Ollie didn’t want anything to do with my husband either.  I was the only one that he would come near and he stuck to me like glue, which made Cubbie extremely jealous because he used to be my “little shadow”.  If I was petting Cubbie, Ollie would literally shove himself between us and basically push Cubbie away from me.  It tore at my heart when Cubbie just gave up and decided that it was easier to stay away from me altogether.  I made sure to take each dog into a room alone with me to give them some one on one time.  I desperately wanted Ollie to bond with me but wanted to make sure that Cubbie realized that he was still important to me too.

When Ollie wasn’t near me he was cowering in his crate. 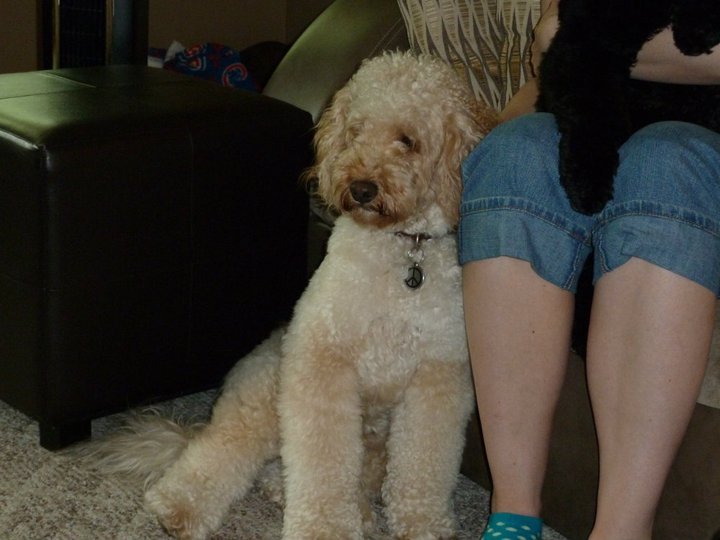 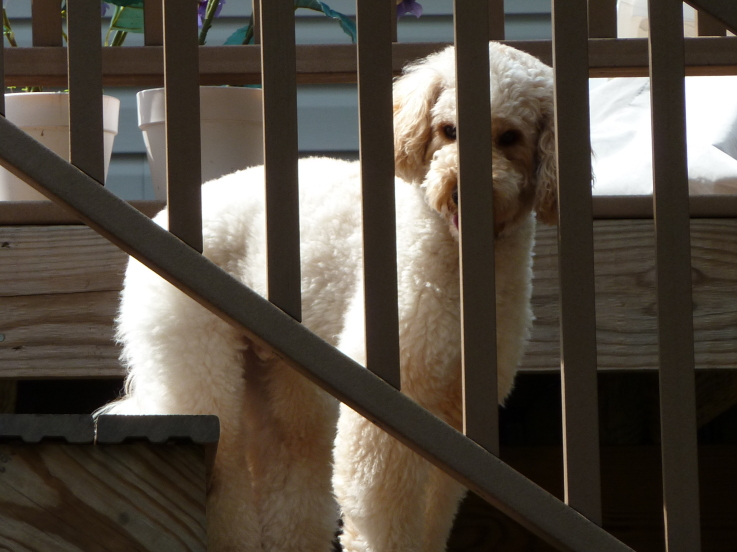 If Cubbie even so much as walked within a few feet of that crate, Ollie would begin to snarl and, with his teeth flashing, lunge from his crate at an unsuspecting Cubbie.  I made sure to scold Ollie for this behavior and it eventually began to subside as he became more familiar with his surroundings.

Cubbie always loved to play with toys but even that became an issue.   Any toy that Cubbie had, Ollie took.  Cubbie always loved to gently carry around stuffed toys but within minutes of stealing them, Ollie managed to destroy them.  I knew that Ollie’s world was going to be turned upside down by coming to a new home, but I hadn’t fully comprehended the impact that it was going to have on Cubbie.  Sure, I knew there were going to be some adjustments but I just underestimated how much things would change. 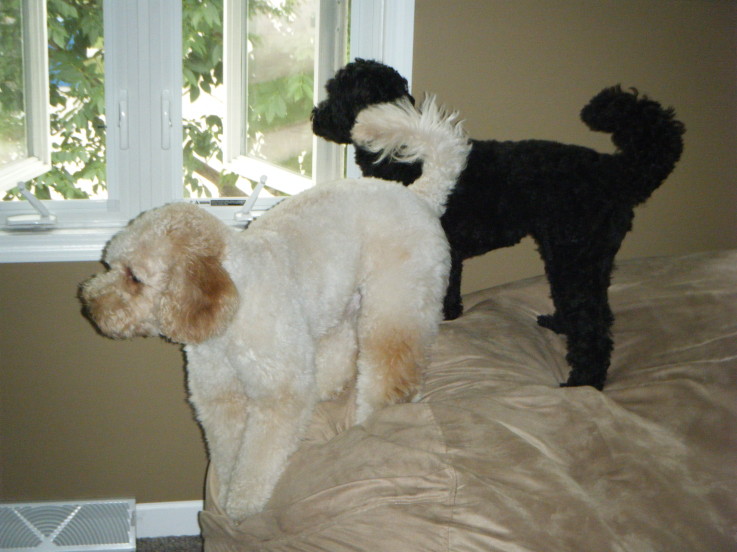 I tried to let the two dogs “work it out” because I understood that they were just trying to determine where they stood with each other, but I didn’t anticipate a sunny afternoon romp in the backyard to turn into a real dog fight.  Seeing a dog fight is scary.  Seeing a dog fight between your two dogs is terrifying.  It is hard to even describe the sounds that you hear and the thoughts that go through your head.  I know not to try and break up a dog fight using your hands, but in the heat of the moment when panic takes over you tend to stop acting rationally and just react.  Both dogs were so worked up that they tried to continue attacking each other even after we pulled them apart.  I don’t think I have ever been that scared before in my life.   After we got them inside and were able to assess the damages it was very easy to tell that Ollie had won that fight.  Cubbie’s eye was blood red and he was bleeding from his back leg.  I rushed him to the emergency vet and luckily his injuries looked worse than they were.  I try not to let myself think about what could’ve happened if we hadn’t separated them when we did.  After that we kept a small air horn near us whenever they were outside in the yard together in case we needed to break up another fight.  It has been 3 months and things are better, but I still have the air horn sitting on the corner of our counter because I don’t ever want to experience another situation like that one. 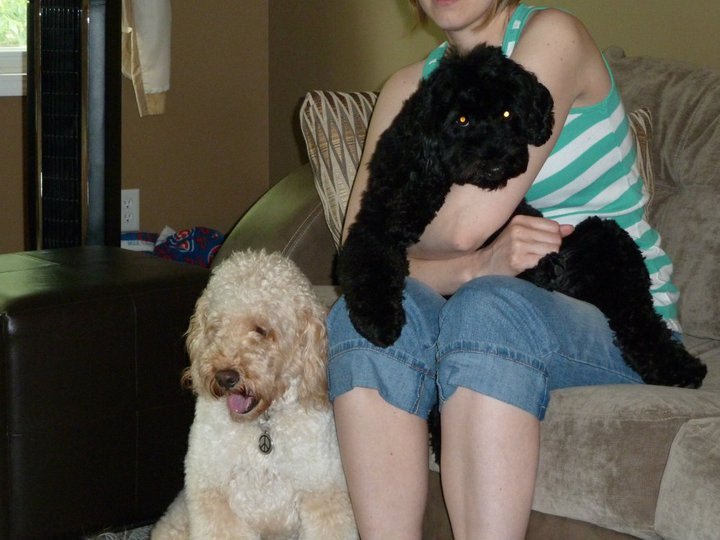 After that fight, I was DONE letting them work it out on their own.  I wasn’t ready to give up on Ollie, but I couldn’t just stand there and watch Cubbie get beat up.   At the suggestion of our trainer, we took away all of their toys and bones and neither dog was allowed on the furniture.  They had pretty much lost all privileges.  We continued to take them on walks together to get them exercise and worked on training but that was it.  I felt guilty doing this, but the trainer said that this will give them the option of playing nicely with each other or just being bored.   Plus, they wouldn’t be able to fight over any toys if we took them all away.  I asked the trainer how long we had to do this and he told me “you’ll know when the time is right.”  Yeah, I didn’t feel very confident about that!!  After about a week, I put two antlers on the floor so they would at least have something to chew on (both are big chewers).  It was probably two and a half weeks (or maybe a little more) before I felt safe enough to give them some toys back and things have been ok.  We used to leave a few toys out 24/7 for Cubbie, but now I try to make sure to put them all away before I leave for work each morning and just leave them with a few antlers and kongs.  Ollie still likes to try and steal things from Cubbie, but for the most part Cubbie seems content to just go and choose another toy from the bin to replace the one that Ollie took. 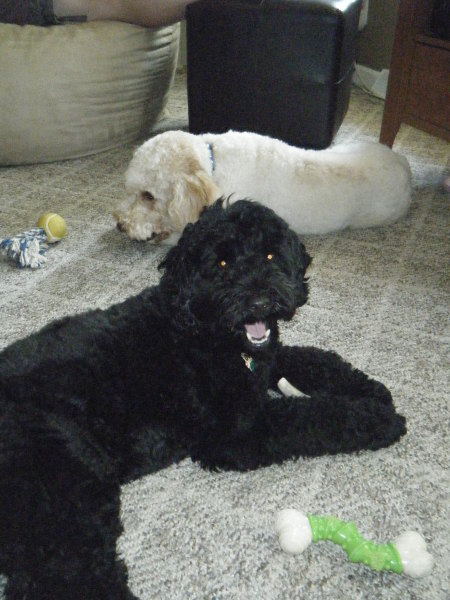 We used to play fetch with Cubbie every night while watching some tv, but haven’t been able to do that.  Ollie has gained some much needed weight and will bulldoze Cubbie right over in his efforts to beat him to the ball.  Once Ollie’s “stay” gets better we will hopefully get them to take turns playing fetch, but that is a work in progress right now.   I feel bad that Cubbie doesn’t get the opportunity to play fetch like he used to, but I am confident that we will be able to work through this issue too.

The improvements were gradual and each day things got just a little bit better. 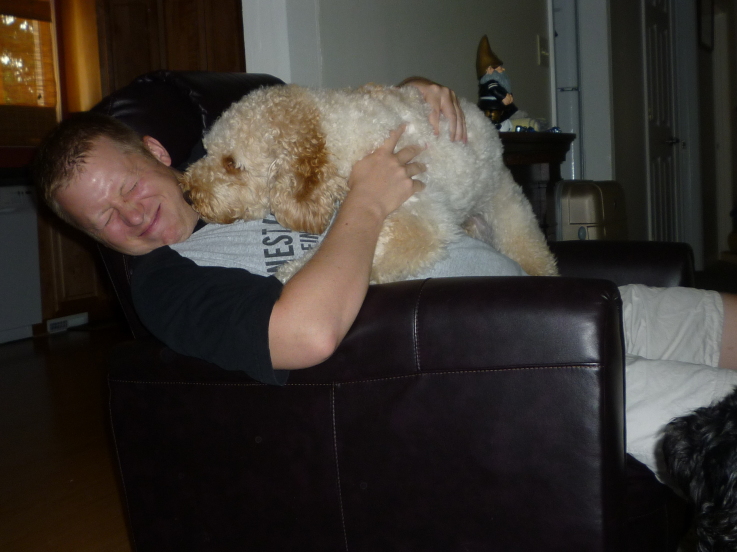 After they got past the fighting, Cubbie constantly tried to engage Ollie in some friendly play but it seemed like Ollie wasn’t sure how to really play with another dog.  We sent them to doggie daycare together a couple of times and that really seems to have helped. 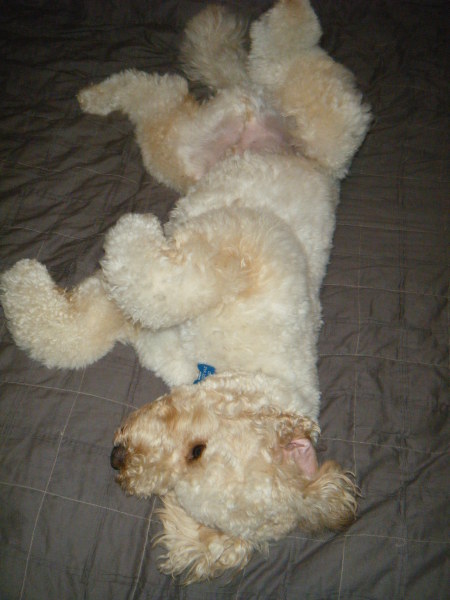 One day out of the blue, Ollie just kind of pounced on Cubbie and they started playing together.  I just stood there watching them with tears in my eyes. 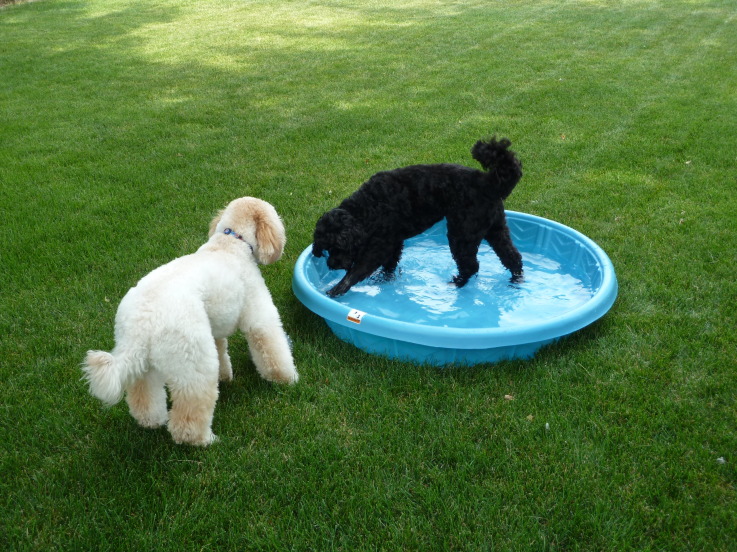 I was relieved that they were getting along and I was proud that I had stuck it out.  Sure it would’ve been easier to call up DRC and tell them that we couldn’t do this (believe me, I thought about it), but deep down I knew that we were the right home for Ollie and that we could make this work.  He already lost one family, I wasn’t going to let that happen to him again.

Somewhere through all this, Cubbie and Ollie have become buddies. 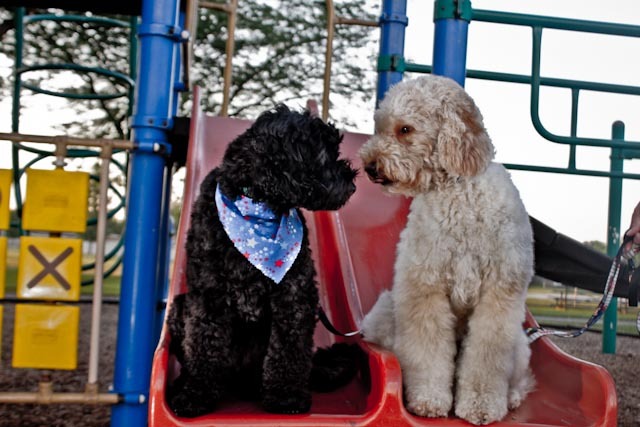 We boarded them last weekend and the employees told us that the two of them kept trying to go into the same crate together each night at bedtime.  Just thinking about it now makes me smile again.  Having dealt with all of the issues that we faced makes these small moments so much more special.  We now have 2 doodles that we love very much, and I can’t imagine my life without them.  Overcoming those obstacles was definitely worth it in the end. 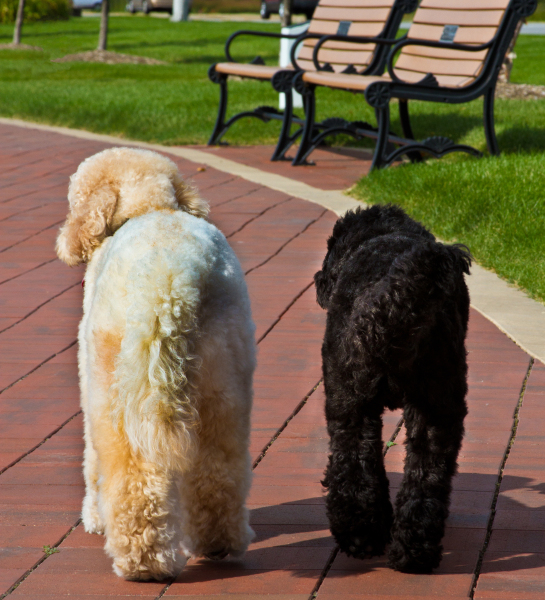 Your story gave me chills!! I love the last pic true buddies!! I hope I can have a happy ending too.

Comment by Nina W, Georgia Director on September 29, 2011 at 7:43pm
What a great story of perseverance!  Thanks so much for sharing.

Comment by Diane Stasiek on September 29, 2011 at 2:39pm
Great story and photos! Thanks for sticking with it and giving Ollie a chance at a wonderful forever home. I love a happy ending, so happy you had one. Doodle kisses to you all!

Amy, you are amazing and this shows 1000% that the DRC made a wise move when approving you to adopt - I think it is safe to say that the majority of owners (not I say "owners", not parents lol) would have given the poor guy away again.  You are incredible.

And this is a wonderful post that could help others in the future.  Thank you.

Comment by Jane, Guinness & Murphy on September 24, 2011 at 9:27am
Thank you so much for sharing your story and for being so committed.  You clearly have done all the right things, and I'm sure this will be so helpful to many others.

Comment by Nancy, Ned, Clancy, and Charlie on September 24, 2011 at 1:07am
This is such exciting news.  I think we often forget to post the down side when adding to our dog family - rescue or not.  When we got Clancy, our lab-mix immediately put him in his place (with a look), the next day Ned told Clancy who was boss in a brief tussle, BUT it took months for Clancy and our Springer to settle their differences.  At first we kept them separated when we weren't home and also limited toy access. Then we only had to keep high value treats up - we still can't leave our huge femur bones down.  It has been a year and a half and Clancy and our Springer will never be best friends but they are family to each other and easily share space.  The other day I caught Clancy sleeping with his chin on Gordie's back while they both were lounging on the bed.  Oddly when we had Sunny for these last three months, there were seldom any disagreements between any of the dogs.