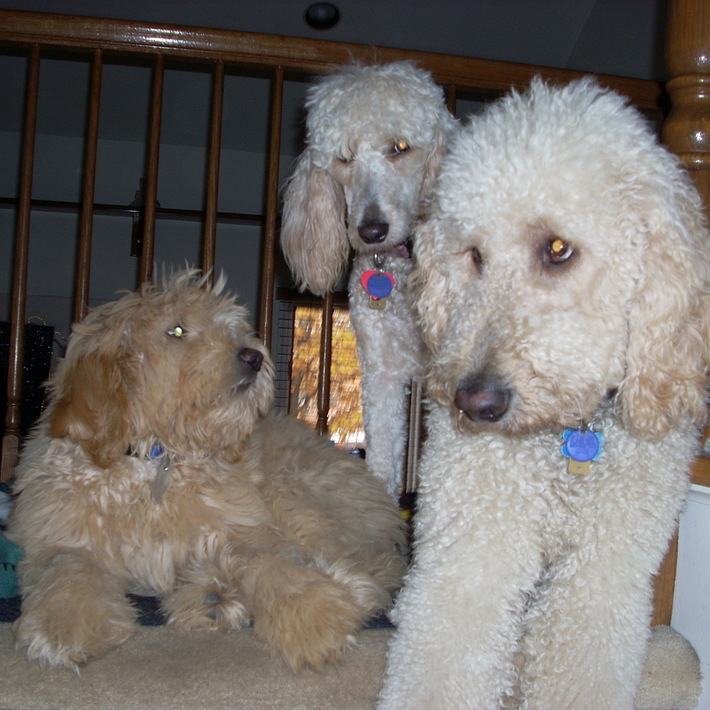 Many will remember that we adopted Mariner 10 years ago after he had suffered  from a brain injury that left him blind and having seizures.  He was the  reason I created the two groups "Health and…Continue

Yesterday was Mariner's 6th Birthday!!!Mariner has overcome many obstacles in his life. He had a skull fracture at 7  weekds old that caused him to have seizures, lose much of his eyesight among …Continue

In order to confuse the public we now have a new dog "Cobbadog", well not a new dog just a new name.  Beverly Manners has decided that her ALD's are now to be called "Cobbadogs".  So as not to…Continue

Started this discussion. Last reply by Karen and Jackdoodle Feb 7, 2012.

Mariner learned to use doggy stairs in one night!!!
3 Replies

Mariner loves to be on the couch.  Due to his physical problems he can not get on the couch by himself.  He will put his front paws on the couch and wait for someone to help him up.  At 90+ pounds…Continue

Where are you located?
Randolph, NJ

Tell us about yourself and how we might help you:
Parents of three GD's.

Boomer and Mariner are biological brothers. Mariner fractured hs skull @ 7 weeks old, causing blindness and a seizure disorder. As a puppy he had to relearn everything, walking, eating, peeing, etc. Mariner has gradually regained much of his eyesight. He has not had a seizure in over a year (as f 12/3/11), since his medication was changed to potassium bromide.

Have you read our adoption policies, located under the "About DRC" tab?
All were gotten from breeders. After Mariner's accident the breeders provided excellant care but realized they could not care for him for the long term. If not adopted he was going to be euthanized. Samantha, our daughter, was moved by this and was instrumental in us adopting him.

Are you now involved in Rescue? If so, how? Are you interested in volunteering with our rescue?
.

We just adopted Oscar - now Zeke.  He has been with us for 8 days, and we are in love!

thanks for the friend request

Sharon:  I was just reading your profile about your dogs.  You are a live saver, too.  Literally.  Your dogs sound great.  I, too, had a dog with seizure disorder.  He was not a goodlendoodle - husky/rottweiler mix.  The love of my life.  Suddenly at age 3 he began to have seizures at night about once a month.  Couldn't find a cause.  I handled the seizures without medication because the vet said once he started he would be on it the rest of his life.  I got my GD Emmett to be his companion and hopefully could alert me when the other dog was having or going to have one.  I had Emmett in the house about a month and all the seizures stopped just as suddenly.  Mariner sounds like such a sweet boy.  You do have a house full.

Red Ribbon
Oh, this is for you!
From the Gift Store

Ann Kendig said…
Thanks for the gift Andy!! It was wonderful meeting you, your wife and your doodles. Hopefully we will make it back again to NJ next year and would love to see all of you again.
Have you been to the store to buy some new leashes yet? lol

Sharon Biesele said…
Hi Andy and Sharon - Thanks so much for the friend request. I'm sorry it took me so long to respond. I've been in the process of moving to our summer home in the Adirondack Mts. of NYS and things at home were a little busy. I promise to be more attentive in the future. Sharon

Lisa Rab said…
Happy to find the site...looking forward to making many doodle friends. We love our rescue doodle and cannot imagine life without him!

Art Lipski said…
Greetings, new Friends! Even though we are not doodles by genetics, we are doodles by friendship. In fact, we are looking to add a sister doodle sometime. If we were still in New Jersey (lived for a few years in Long Valley, Washington Township) we could visit.
Your friends, Siena and Barleycorn (Tucson, AZ)

Wendy Mae Baldwin said…
Yes. We realized along the way for our doodle that the standard poodle would probably be a fit for our family as well. Tripper was worth the many hours of searching and all the failed attempts. We travel into your routinely to visit family in Lake Hopatcong. We are in Cape May County, the very southern most part of New Jersey.

Jacquie Yorke - DRC Director said…
Welcome ANDY AND SHARON! So glad that you made it here! Thank you for joining us and for continuing to support Doodle Rescue Collective, Inc! We are so grateful for your friendship.....