THINK POODLES ARE TOO "FROO-FROO"? 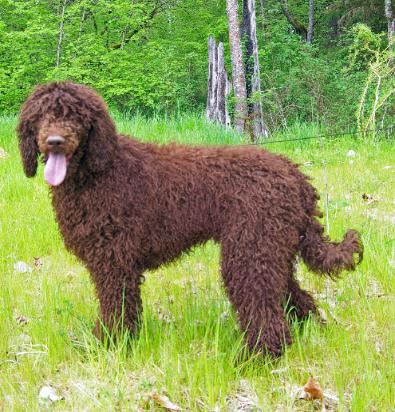 All of the dogs above are STANDARD POODLES!

You can't tell the difference can you?

To some people Poodle adoption & ownership is something that would never be considered.

Indeed, it seems that Poodles were just never cool enough BEFORE....

....they started sleeping around with every other dog breed under the sun!

Why is this so?

This is a question that Karen & I have been asking ourselves for YEARS! We would love to get your thoughts on this as well.

Below is an example of a Poodle breeder who actually cares about the health, welfare and lines of their dogs. All puppies are health tested and raised IN THE HOME. All puppies have at least a 10 GENERATION PEDIGREE.

Read what this breeder says about Doodle Breeding Programs

QUESTION: Why are we not breeding our Poodles to Labs or Golden Retrievers?

"As owners of Standard Poodles we at one time considered breeding Labradoodles. We had heard some pretty fantastic claims about the Labradoodles. Fortunately we found out the truth. Here are six common misconceptions:"

1. They don't shed and are allergy friendly.

A note about shedding:
There is no way to know for sure if a cross-bred pup will not shed until it gets its adult coat (between 12-18 months old). Some pups appear not to shed until the adult coat comes in.

2. They are easier to train than a Lab.

Fact: Due to the crossing of two different breeds there can be absolutely no guarantee a cross-bred pup will inherit the easy to train Standard Poodle personality.
It could inherit the Lab train ability.... which is not a bad thing... Labs are not stupid! But it typically takes more repetitions to train a Lab.

3. Lower maintenance breed! I will not have to cut the non-shedding coat!

Fact: The non-shedding coat needs to be cut 3-4 times a year. (Same as a Poodle) Regular brushing is a must or the dog will get matts and matts can be a breeding ground for parasites! (same as a Poodle) As well all ear hair must be plucked so the ears won't get infected - (same as a Poodle.)

4. They are the latest fad! A new breed!

Fact: YES they are the latest fad! Unfortunately that means once they are no longer a fad there will be many homeless pups in animal shelters. This has already begun in the USA and Australia. Many of these new 'designer dogs' are available at a
discount prices at animal shelters. They are not a new breed yet! The Labradoodle (or Goldendoodle) will not be considered a new breed genetically speaking until breeding two Labradoodles together will produce off spring which all look and act similar to all Labradoodles. A breeding must produce the same type (phenotype) and only that type
generation after generation. This is also called breeding true or having a stabilized breed.

Fact: The curly haired Labradoodle looks as he does because his hair is cut into the 'Labradoodle' cut. (Anyone with a quality pair of clippers and a bit of time can learn to clip ANY curly dog into the same cut! This is not rocket science!) The thing to remember is ALL puppies are cute. No one can tell what a cross-breed will look like when it is an adult! Remember most of the dogs life will be spent as an adult. That cute puppy stage only lasts for a few MONTHS

6. They will be healthier because they are not inbred like purebred dogs.

Fact: Not all Pure-Bred dogs are inbred. Our Poodles are not inbred! Pure Bred Standard Poodles are statistically the healthiest and longest lived breed of dog.
There is a misconception that by breeding two different breeds together you will produce a healthier dog. Unfortunately this is not true. A Labradoodle can get the genetic problems common in BOTH breeds instead of just one.

Using this theory the Lab should hot be bred to the Standard Poodle because they share most of the same health issues! Obviously this breeder did not do their genetic research.

The bottom line is both purebred and cross-bred dogs are susceptible to potential health problems. The best way to reduce the risk of health problems is to not inbreed, health test breeding stock and MOST importantly make sure your breeder does extensive 10 generation pedigree research."