MIDNIGHT IS OUT OF SURGERY AND DOING FINE! 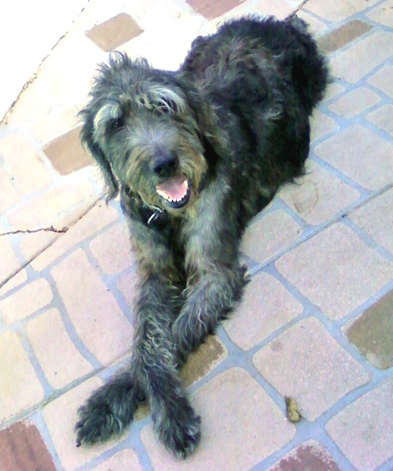 "I have goosebumps right now.  I just heard from Jacquie, and Midnight is out of surgery, and his prognosis is excellent.  As many of you know, they had to postpone the surgery yesterday because he had a skin irritation, and they needed to be sure there was no infection.  The surgery today took four hours, and four surgeons operated on him.  I haven't stopped thinking about this poor guy, and it's a huge relief that it's over.  He should now live a full and happy Doodle life without pain.  Our "blanket drawing" is planned for tomorrow evening...we'll have a video of Daisy picking the winner, and we'll post that here in a discussion."

Permalink Reply by Cathy Neal on December 3, 2010 at 10:10pm
Precious boy--praying and thinking about you and your speedy recovery. Doodle hugs and kisses Love--Bella, Quigley, Cathy and Zachary

Permalink Reply by Jacquie Yorke - DRC Director on December 4, 2010 at 3:34pm
Thank you Todd, Krista and Matt!.......What a fantastic video!.....Congratulations to Teresa Rubin who won the blanket drawing!

What a whirlwind day we had yesterday! Dr. Diane from the vet hospital called early yesterday morning and said Midnight was doing so very well that he could go home early! I told her we were not prepared -- didn't have any floor covering or a crate! I decided we'd figure it out -- get him home ASAP.

Had to go to tire shop and get my blown tire replaced and one other so now I've got a full size spare plus the emergency spare. Took forever so we didn't get to leave till 2:30 and were supposed to be there at 4:30 but we made it just a few minutes late. Another student came in to explain everything and showed us X-rays of the non-glue 3-piece new hip!

Finally Dr. Roe (he is from Australia) and student who is from Rhode Island and was really hard to understand! but good. They brought Midnight outside and he really is walking well and putting some weight on his "new" leg. They had the "sling" which is really a sort of spongy rope with handles which is put under his back abdomen to be readied and keep him from slipping and falling or raising up when he does something like try to go up stairs. Dr.Roe also showed me that when MN got into a good position to urinate, he removed the sling as not to interfere.

I'm getting used to it but every time we go out, MN wants to go to the car. He must think he can go to the park - I don't know. Dr. Roe totally went along with our idea of medicating him for the first couple of weeks and he gave us some Trazadone which I can add to MN's regime. MN gets 50 mgs for now.

I'll send you a copy of everything I got Jacquie. Got to go through the snow! (I love it) to the store. Love you all!

Permalink Reply by Jacquie Yorke - DRC Director on December 7, 2010 at 1:54am
UPDATE FROM JUDY STEELMAN

"The blanket drawing was so well done and also very touching. This boy is one lucky dog and such a joy to deal with!

This is a picture of Midnight out on a rug sitting next to me while I doodle around, giving him some company. He is so good and so smart. That good doodle character plus his meds are making it very easy to care for him. When I take him out, he keeps wanting to go to the car or the truck and I realized he has so much more fun in the car b/c he enjoys just looking out the windows. I think he misses his activities. Even at the hospital he had other animals around and lots of people walking by so we're making an extra effort to stimulate him and make him feel even more loved than he already is.

He is putting quite a bit of weight on his leg (which is good) but is doing so gingerly. He is feeling so much better probably better than he ever has in his entire life! Believe it or not he really wants to romp! so I'm keeping him on his meds all day as the vet suggested we do for the first two weeks -- the Firocoxib (for pain, swelling and anti-inflammatory, Tramadol for pain and Trazadone to decrease anxiety and restrict activity level.

He is never so over-medicated to the point of being out of it or sleeping all the time. He is just calmer and more subdued. He is able to go out and do everything necessary. Has had no vomiting or diarrheah. His appetite is good and he drinks plenty of water. We were cautioned that he is nice and slender and doesn't need to lose or gain any weight.

As this holiday nears I've been thinking of your family and Midnight. He is so lucky to have found you as well as DRC. He finally has a future of playing in a painfree future!  Merry Christmas Midnight.

Permalink Reply by Nina W, Georgia Director on December 23, 2010 at 9:47am
We are so glad that MN is recovering nicely.  Thanks for the update.

Glad to hear that Midnight is doing so well. I had a hip replaced, so know what he is going through. It just takes time. Becareful he doesn't slip on ice. That was one of my biggest fears when recovering. When does he go for the other hip surgery?