A beautiful 1 year old Goldendoodle girl rescued by DRC in 2012 who needs your help. Harper was rescued from a back yard breeder in Iowa at 14 weeks old. She had been returned to the breeder because she was allegedly plagued with severe urinary tract infections and leaking urine. Instead of taking her to the vet, the breeder was preparing to dump the pup at a high kill shelter, where she was certain to have been euthanized when DRC volunteer Tina Kappmeyer stepped in to save the day. 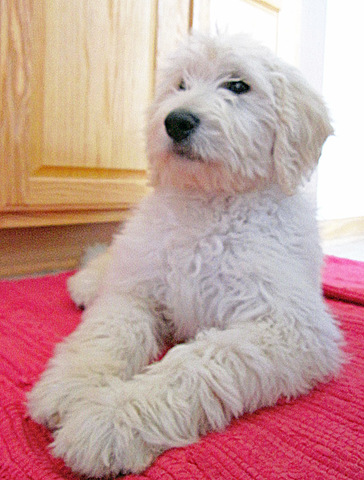 A visit to the vet revealed that Harper was suffering from an ectopic ureter; a congenital condition involving malformation of the tubes that normally direct and carry urine from the kidneys to the bladder. Because of this, Harper was leaking urine and suffering with constant, severe bladder infections. The only way to correct the condition is with surgery which has at best, a 75 percent success rate. Harper did undergo surgery to correct her ectopic ureter in 2012 at the University of Pennsylvania veterinary hospital. She was adopted by the family who insisted on donating the cost of her surgery. But as expected given the odds, the surgery was not completely successful and poor Harper continues to have issues. Fast forward 6 months later: Harper was returned to us after bolting from her adoptive family and being picked up as a stray. We found out that due to personal issues, the family was no longer able to provide Harper with appropriate post-operative care and a permanent home despite their original generosity, best intentions and enthusiasm. We also found out they were keeping Harper confined to a porch and/or outdoors when she continued to have incontinence issues after her surgery. Thankfully, DRC was the contact on Harper's micro-chip information and we were notified immediately when she was picked up by a good Samaritan. It was at this point that the family agreed to surrender Harper back to DRC.

The beautiful Miss Harper has been in the custody of her amazing foster family for many months now and just celebrated her first birthday! But after repeated visits to several veterinary specialists and a follow up surgical procedure, Harper continues to have bladder infections and leak urine. We now know this is due to Harper also having a previously undiagnosed inverted vulva which will also require surgery to correct.

This beautiful, sweet and very special doodle girl has captured our hearts and those of her foster parents who have insisted on covering all of Harper's veterinary expenses since the moment she arrived at their home.

"We picked up Harper after she was found on a busy road in an affluent neighborhood near us. She was a DRC doodle whose adopter found her difficult to handle. Harper was born with several genetic disorders, that had left her incontinent. The first morning after bringing her home we spent a while cleaning our kitchen floor. It was almost wall to wall poop and pee. We quickly learned that her previous owner never house trained her and it appeared she was left on a back porch to fend for herself. Three days with our Doodle family and Harper was house trained but still incontinent. She looked adorable in her diapers, however her dilemma was far from over. Because of surgery for ectopic ureters and an untreated inverted vulva, Harper has had a persistent infection since she has been with us.

After visits to Penn State Vet hospital and testing that required her to be tranquilized, we were told our only recourse would be for her to be tested monthly and if positive treat her with antibiotics. Visits to the hospital cost over $2500 which did not include the meds which were over $400.00. During all of this Harper needed Proin to help control her incontinence. We were faced with the fact that if we were unable to get Harper's infections under control she probably would be faced with serious complications that would shorten her life dramatically but we could not afford the monthly testing suggested by Penn Vet.

We turned to our local vet. After months of antibiotics and testing we have been able to isolate the cause of her bladder infections to her inverted vulva and Harper is scheduled for a vulvaplasty on April 16. The cost of this surgery will be between $700 and $800. Harper will probably always be incontinent but there is a chance she might not be. Only time will tell. All in all the cost of working to give Harper a good quality life will be well over $6000.00. Our vet has indicated that most dogs like Harper are not given that chance.

My point in all this is - we love Harper without a doubt - but Harper should have never been born. She is another victim of irresponsible individuals that probably had a neighbor down the street with a poodle or golden that saw dollar signs without thought to the pain and suffering their greed could cost the puppies or future owners of the dogs they probably paid a premium dollar amount for.

Harper is a happy dog. She is not in pain and for the first time in her life she is healthy. There is the probability she will always be on a medication but she should have a nice quality life. Meanwhile I never miss the chance to talk to people about how irresponsible individuals cause such pain and suffering not just for doodles but for all dogs brought into this world by so called backyard breeders and puppy mills. It is an important message and Harper is an example of the need for giving it to anyone you can.

PS-Harper started as a foster but is now a part of our family. She is one of the smartest and sweetest dogs we have ever had. Also DRC cannot afford the expense Harper's care and treatment has cost. It would be unreasonable to expect any rescue to do so but they have been there for support and encouragement. Some might feel it irresponsible to go to the lengths we have but just look at that face. Like our vet said "she deserves a chance". They also have worked to help us keep the cost as reasonable as possible.

Please say a little prayer for Harper, us and the rest of our doodle family. We thank you and Harper thanks you. We will let all know how things go after the surgery."

DRC has established "Harper's Fund" to raise monies to cover the expense of Harper's upcoming corrective vulva surgery, and to ensure that her beloved  family have available DRC resources to cover Harper's medications, tests and post operative veterinary care.

As always, we thank you for your kindness, your friendship, 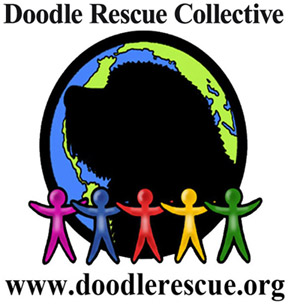 What a beautiful, yet sad story. I hope many can contribute to Harper's fund and help her out.