DRC BEHIND THE SCENES REPORT- A SAD STORY

Last week, our dear  friend  Elizabeth Gunn of Gunn Dogs took in a 3 month old Goldendoodle puppy surrendered by it's owners for what they were calling "behavioral issues." The puppy Smokey was bought from a "breeder" selling pups out of a truck in the parking lot of the local MacDonald's..
Smokey would not allow the family to touch him, hold him and when they would try, he would cry out run away  bumping into objects as he would try to hide from them. They said he had seizures (their vet said it was due to "low blood sugar) and that he was "crazy" and "way too much work"  He had UTD shot records (given to the family by the "breeder") So Elizabeth took the pup knowing that our two organizations would be able to assess him properly and get him the proper care and rehabilitation and whatever else this poor boy needed to be happy and healthy.
The  moment he arrived he had a seizure. He was immediately taken to the vet where he had another seizure. The vet came to the conclusion that Smokey had Epilepsy which would certainly account for his apparent behavior and he was placed on anti -seizure medication and sent home.
Smokey stopped seizing briefly but still cried out, ran away bumping into objects trying to hide.  Elizabeth and I came to the conclusion that the puppy was suffering from blindness and neurological issues not associated with Epilepsy. We thought perhaps he had been abused, kicked in the head or struck with a blunt object and that head trauma was the reason for his symptoms and seizures.
Elizabeth also suddenly realized that despite his young age,his neurological symptoms and  the blindness were also indicative of advanced Distemper. We were horrified by the thought  but had to act immediately. So Smokey was rushed back to vet and the vet was told of Elizabeth's observations and our thoughts on diagnosis.
Tests  showed no sign of head trauma or internal bleeding and the vet agreed as we had suspected that Smokey was indeed blind.  Other tests did reveal our worst nightmare. Poor Smokey did indeed have advanced Distemper which due to his young age could only have been so advanced if he had contracted it from his mother while in-utero.
We are sad to announce that Smokey lost his battle with Distemper this morning, and has gone to the Rainbow Bridge.
Obviously Smokey's shot records were falsified, and/or this puppy miller has Distemper in his/her kennels. The sickening part is, this breeder was trying to sell several different breeds of puppies at this roadside truck  stand. A ll of the puppies were there displayed outside.....in crates......in the 110 degree heat .
All of them probably have Distemper.
There are likely dozens of broken-hearted families out there as we write who purchased puppies from this roadside stand and this disreputable puppy mill "breeder" ...
Smokey belonged to a 14 year old girl before he was surrendered to us. Her father has not yet told her of his death.
Smokey  was just an innocent  baby - He was 8 weeks old when he was purchased - The untreated distemper resulted in his blindness, his seizures and the excrutiating pain he must have been feeling this past month.
To DRC & Gunn Dogs the thought of this is just too horrible and too much for us to bare.
We are cooperating with state law enforcement, the Arkansas State Department of Agriculture and HSUS to  find out who this puppy miller is and shut them down!
If anyone is in Arkansas and has any information that may help, please let us know.
Rest in peace, little Smokey Angel. 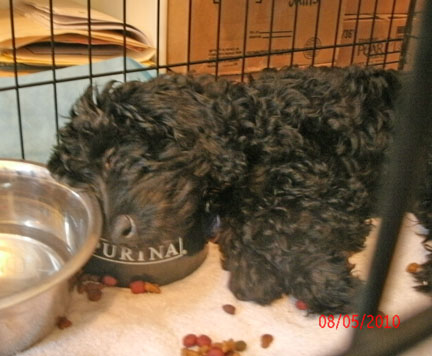 Permalink Reply by Leslie & Halas on August 9, 2010 at 3:13pm
Smokey and all of the other puppies deserve a much better life than what this puppy mill gave them. Thanks for trying to help them, even through the heart-breaking times like this. RIP, Smokey.

Permalink Reply by Michele & Penny the WonderDog on August 9, 2010 at 4:36pm
Heartbreaking. Smokey was at least lucky enough to have you give him the peaceful ending he deserved. Bless you.

Permalink Reply by Liz and Seamus on August 9, 2010 at 5:11pm
This painful saga was very difficult to watch unfold as we felt helpless in trying to help this baby find a happy life. Elizabeth is a devoted rescuer who literally brings this babes off the streets and into her home. She empties her pockets so they can have the proper vetting as soon as possible and she cuddles and croons to these ill babies trying to calm and soothe them. While she was saving little Smokey she also had the litter of the 8 "mad scientists" doodle pups happily recovering from their horrible saga from their neglect at the hands of the BYB. We are extremely grateful Elizabeth calls herself our peer.

Permalink Reply by Bonnie Nathan on August 10, 2010 at 3:49pm
That is such an unbelievably sad story. I hope that Smokey's siblings fare better.

Permalink Reply by Jacquie Yorke - DRC Director on August 10, 2010 at 4:09pm
The retailers that host these "puppy stands" in their parking lots need to be made aware of this atrocity. If they refuse to address the situation and act they should be boycotted, petitioned and the media immediately notified if the situation persists.

It's touchy because many of these same retailers also allow reputable transport companies to use their parking lots to deliver rescue dogs to their new forever homes.

Permalink Reply by Jacquie Yorke - DRC Director on August 10, 2010 at 4:10pm
I want to also mention that poor Elizabeth has been dealing with this situation on her own in Arkansas and all the while caring for our Arkansas 8, doodles Benton, Sheridan, Benellie, Picabo, 2 other doodles she picked up as strays wandering on a highway in Little Rock and the other 36 dogs of various breeds and sizes that Elizabeth is personally responsible for saving ....Liz Syring and I were seriously considering jumping on a plane to Little Rock this past weekend.

Elizabeth is an amazing woman and a dedicated rescuer. We are proud to have her as a friend and a colleague

Permalink Reply by Suzey Berry on August 11, 2010 at 2:06am
I read this story on his Petfinder page and was so mad and yet wanted so hadly to cry and be angry at the same time. How on earth does this stuff still go on, it just baffles me. This story has stayed with me from the moment I read the update and I am both furious and heartsick over what this puppy and the others went through...