IT TAKES A VILLAGE TO SAVE A HOMELESS DOG

Today we are priviledged to be able to help save "Harry" from euthanization in a southern VA animal shelter. Three days ago DRC was contacted by an independent rescuer in VA who regularly visits the high kill shelters and helps pull adoptable dogs for rescue groups. This shelter is at their maximum capacity and need to start euthanizing dogs for space. Harry was one of the dogs who would probably be the first to be put down. Harry is a happy 1 yr old chocolate labradoodle (Very Labby!) who was picked up as a stray and not claimed by an owner. He has a tumor on his back paw and has licked it open. He needs to see a vet and have it biopsied and removed.

Another local dog lover in southern VA pulled Harry this morning and drove him 2 hours north to meet a DRC doodle train volunteer who drove him another 2 hours to meet the foster mom who will bring him into DRC fostercare program. All these volunteers' efforts combined helps these kind of rescues happen.

Harry will be fostered in Baltimore where he will get his medical treatments needed to become healthy and adoptable. We are so grateful for all our DRC volunteers and the help they provide to save each life! 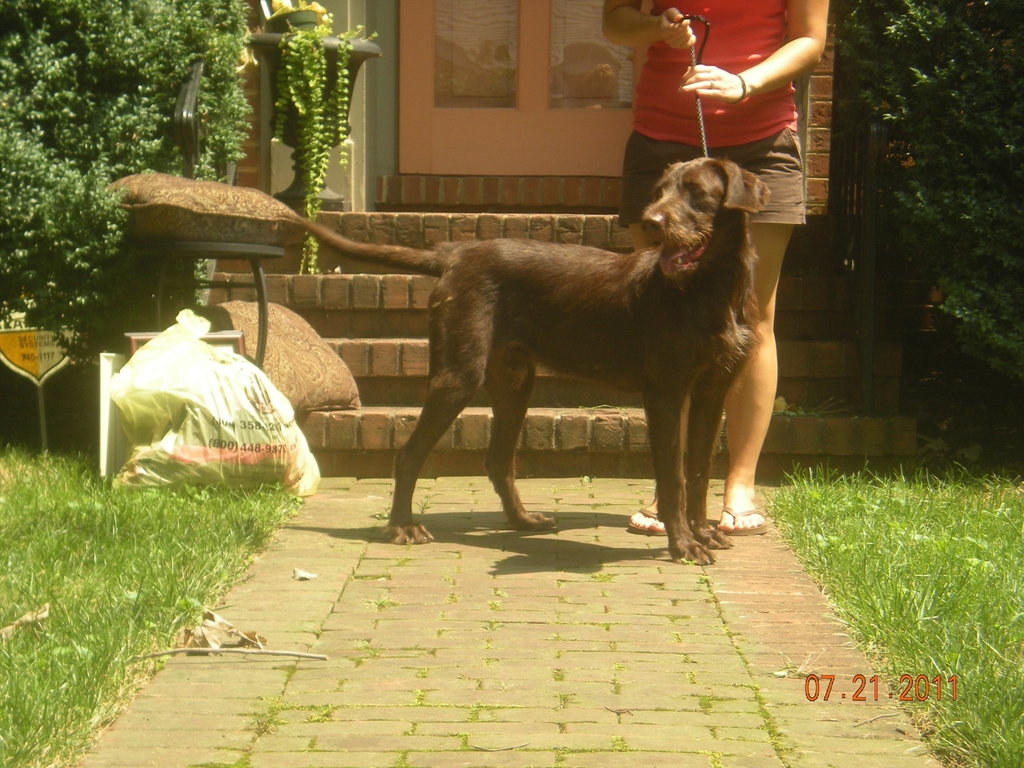 Comment by L.A. Brickner on August 5, 2011 at 12:09pm
Good news!  The pathology report is back and Harry/Brownie will be just fine.  It was calcinosis circumscripta, basically a calcification of tissue around an old injury.  He's doing just fine, and in fact already has a loving family waiting for him.

Comment by L.A. Brickner on July 28, 2011 at 1:26pm
Harry (we call him "Brownie with nuts", but that will change on Monday) is progressing wonderfully.  He went to the vet and we've arranged to have him neutered and have the growth removed.  He continues to learn new things every day. He walks much better on a leash, has pretty much mastered "sit", knows that humans go through doors first, sits for leash and meals.  He's ok in a crate, but it still a bit wary about getting in.  We're working on making it a fun place.  He's amazingly mellow for such a young dog.  He's not a ball chaser and I don't think he quite understands chew toys yet.  He loves being with my two dogs and he settles down nicely in our bedroom at night.  He's going to be a wonderful pet for some lucky family.

Comment by Kimberly Simonetti on July 23, 2011 at 11:57pm
Harry safe and loved.  1st day of real training under L.A. He is going to be an amazing family member. 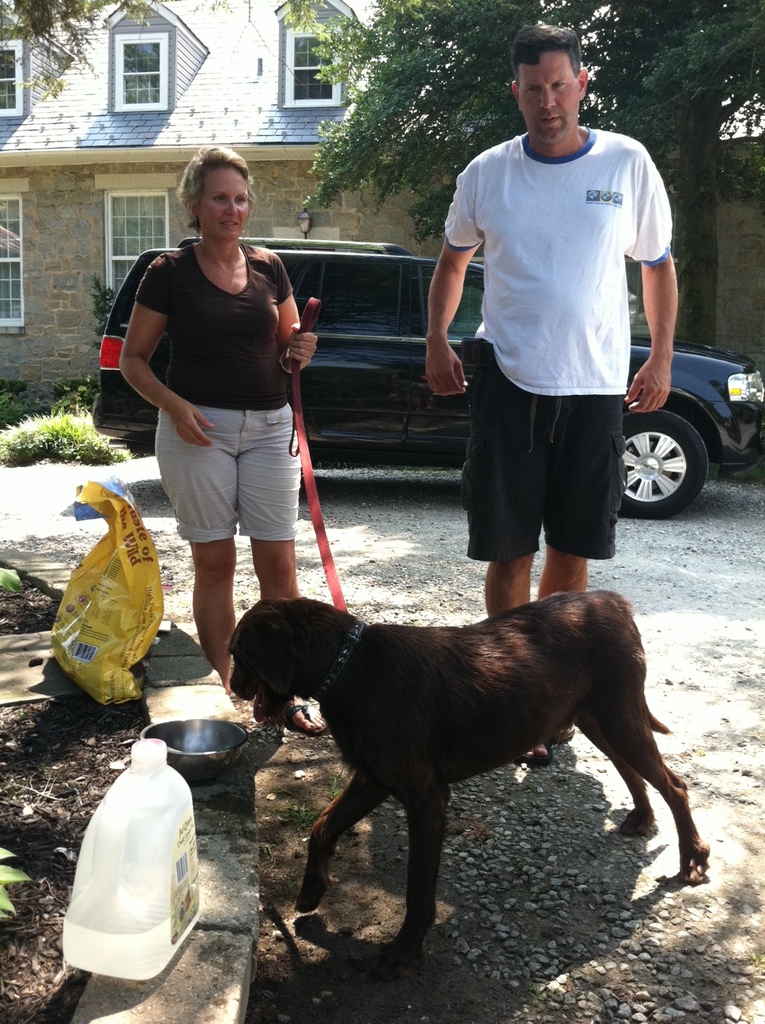 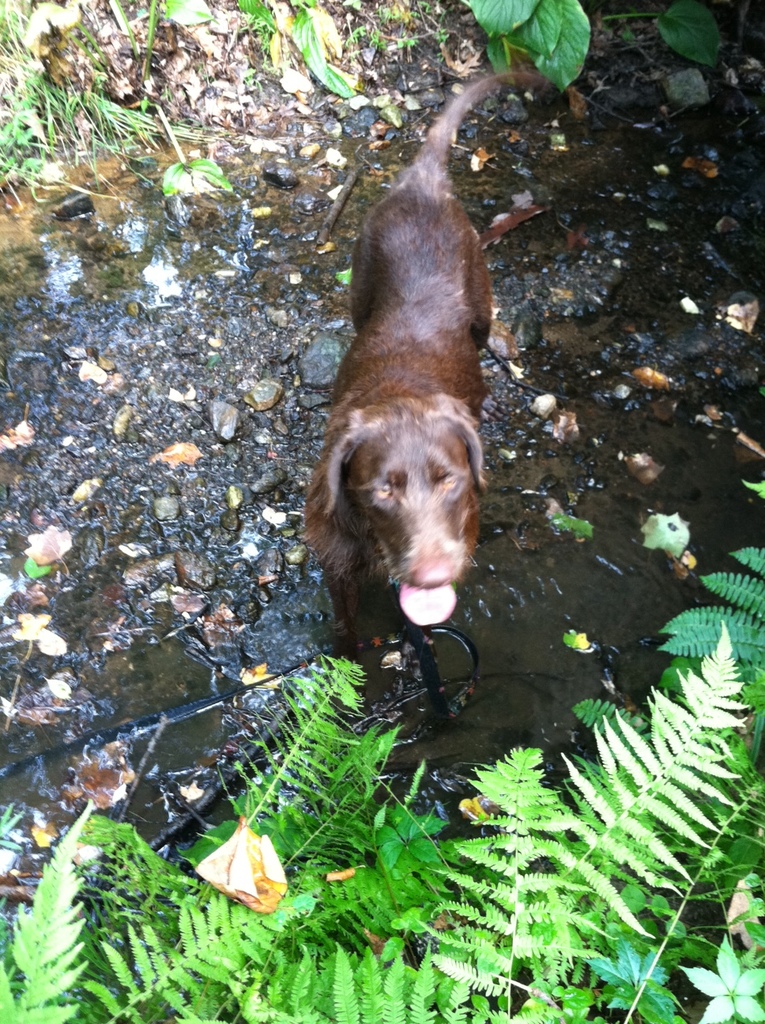 This was the best I could do with squirming dogs and my cell phone, but you'll see he's as tall as Capo (the blonde), who is 80 lbs or so.  It seems I'm collecting one of every color! 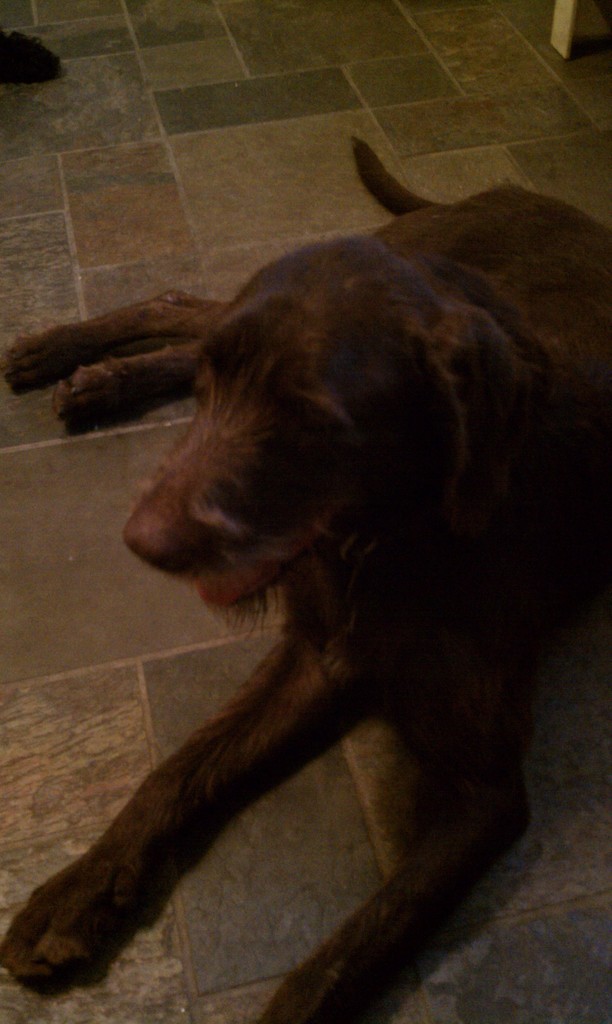 Here's a picture of him lounging after dinner.

Harry came to us, via Kimberly, so that he can start his new foster life.  He's been with me for about 6 hours now, and he's such a sweetie.  He has perfect puppy manners and integrated immediately into my pack of two young labradoodles.  We had previous plans to go to my in-law's house for dinner and we brought him.  He was very calm, polite, and just all around amazing for such a young dog who obviously has no clue about what's to be expected of him.

He doesn't appear to have much training. Kimberly noted that he is good with cats and appears more or less housebroken.  He doesn't walk well on the leash, but he's already had two lessons with a Gentle Leader and is progressing.  He also doesn't appear to know "sit", but maybe I'm just using the wrong language.  Give me more time to figure out what he knows.

Most importantly, he's gentle and sweet and loving.  He definitely enjoys hugs and attention and hasn't so much as growled at the inquisitive other dogs.  He seems like an old soul, but based on his teeth he's got to be only around a year or so old.

He has an alarming looking tumor on his rear foot.  I'll be getting that checked out asap.  It doesn't appear to trouble him. He doesn't lick it and it doesn't make him lame, although it is an open sore.  He also needs to be neutered (of course).  As you can tell from his picture, he's very labby and tall, although he's a bit underweight and scabby coated right now.  He'll benefit from some quality food and supplements and we'll see what that coat really looks like.  He has charming whiskers and reminds me of an otter.  As of right now, I'm even wondering if he's been clipped, since he has tufts of longer hair on his body, too.  Interesting mystery.

Such a nice looking boy.  Thanks everyone!