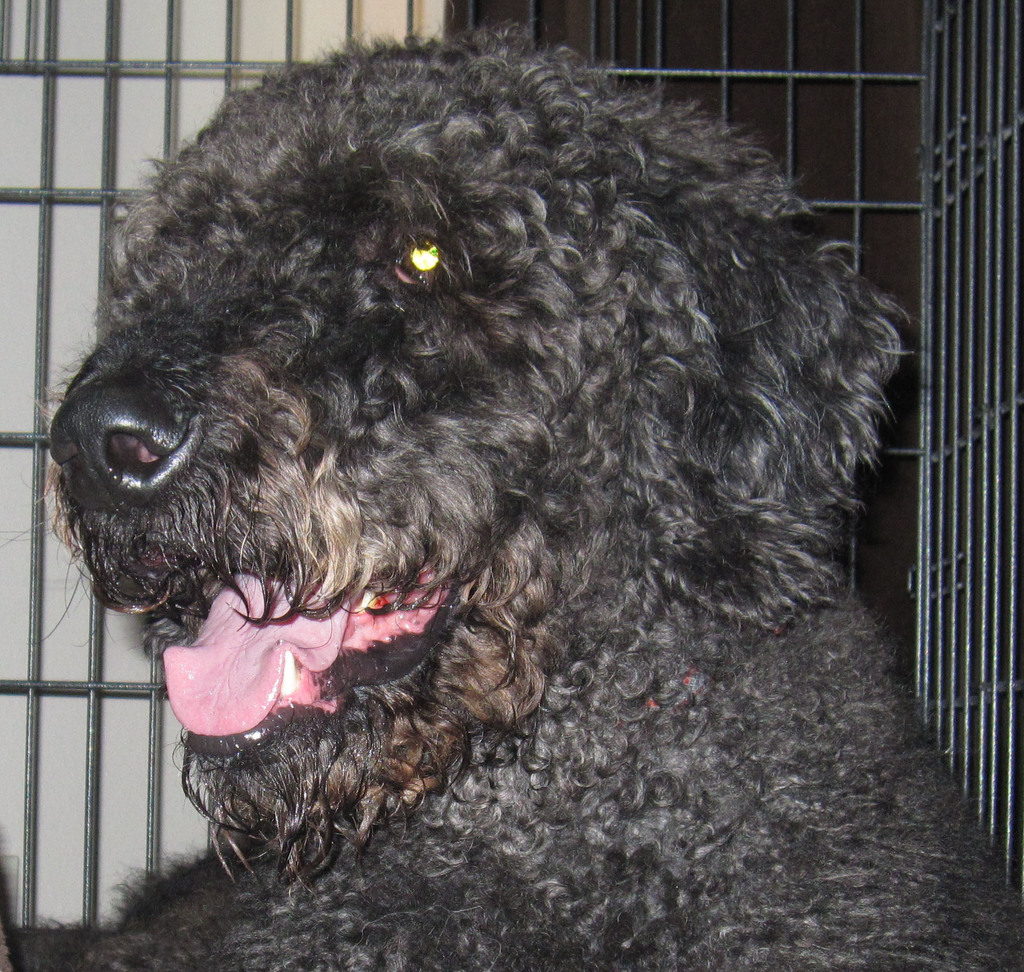 Eddy was dropped off at a shelter because his owners got divorced.  Once there he was having a hard time adjusting, was determined not a good candidate for adoption and his time was limited.  I went down to evaluate him and found the sweetest doodle.  The shelter worker told me Eddy was unable to be handled by some of the male workers.  Which I was visiting with one of them while Eddy was on his way up.  Supposedly Eddy would not let this guy near him, but once up front with me.  Eddy sat next to me with his tail wagging 100 mph and got petted by him like they were best friends.  I decided right there the big guy was going home with me.  There was lots of people and other dogs around for puppy classes.  All Eddy wanted to do was socialize with everyone.  Little dogs were going by, one even got away from it's owner and ran right up to him.  Eddy took everything in stride like it was nothing new.

This more guy arrived at the shelter with a double ear infection.  His ears had not been plucked for so long and were full of hair.  On top of that his owner had been treating his ears with something greasy.  Which turn the hair into huge mats inside his ears.  So one of the first things the shelter did was pluck his ears.  The shelter worker said when Eddy arrived he was the sweetest dog.  It was after the ear plucking his personality changed.

He had such a strong urine smell it took 2 baths to get the smell off and 2 more to get the rest of the dirt off him.  Unfortantunely I believe the shelter was a blessing in disguise.  Eddy had not been groomed in a long time.  It appeared they recently shaved the top of the mats off and left the rest.  I ended up shaving Eddy after these photos he was matted to the skin.  He is underweight with cuts and sores that are healing.  Eddy's first couple of meals he could hardly hold food in his mouth.  I believe he probably ended up outside and neglected.

With all that said,"EDDY LOVES TO CUDDLE"  There is not a mean bone in his body.  I got him a new bed for the crate.  Which he is very proud and fond of by the way.  I could hardly get him out of it to take photos.  Here he is showing off that famous doodle pose. 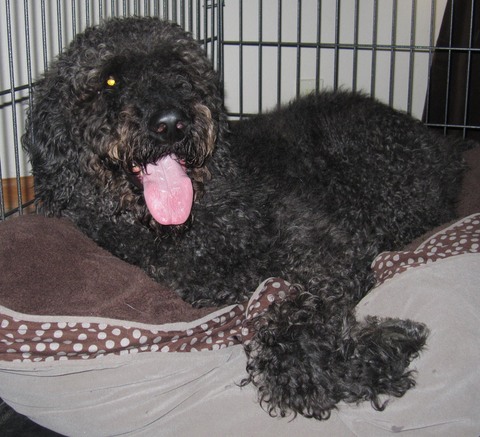 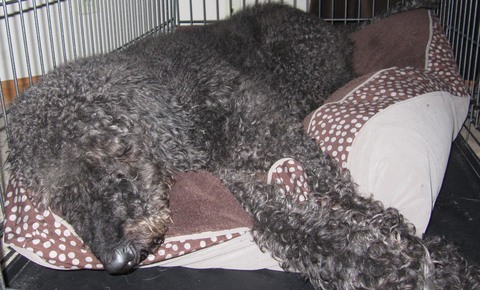 Eddy is starting to relax and play.  Thank goodness, Clover walked around the house pouting for 4 days.  We discovered last night he really loves playing fetch.  I predict the ZOOMIES by this weekend. Of course Eddy loves Lexi.  I wanted to change his name, but Lexi disagreed.  She stated "I like it mom.  He's our Eddy Spaghetti".  Still not sure what spaghetti has to do with it, but it's not a battle worth arguing over.  LOL

Lexi's guarantee "It's going to be an Adventure, Yippee"!!!

Until the next update.  What do you get when you mix a doodle and a trampoline????  Lexi, bouncing Clover up & down.  Yes, it really happened.

Terri, this blog is from last July. Eddie has long since been adopted.

will Eddy go up for adoption and if so, when? He sounds like a wonderful dog and a very lucky dog that you found him and gave him a chance! How sad that anyone neglected him like this! I had a golden doodle that passed away and after several months am now searching for the perfect rescue…Please keep me informed if there is an opportunity to adopt. I have already completed an application.

Eddy is so lucky to have you and Lexi fostering him.  What a love he sounds like.  Divorce or not, how can people neglect their 'child' like that????  Getting even with each other perhaps???

Eddy is adorable, Tina, thank you for fostering him!

Eddy is in Iowa

Great story Tina and thanks for rescuing this beautiful pup!