Eight years ago this week, the person who bought JD from a pet store as a puppy left him at a shelter and never came back. 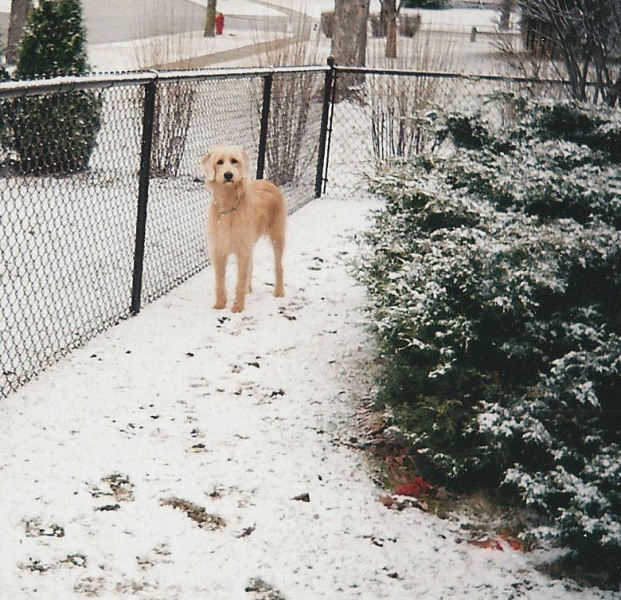 The reasons he was relinquished were vague. Something about a job change, I was told.

I was also told that the man carried JD (who was 14 months old and weighed 69 lbs) into the shelter in his arms, and that he seemed emotional about what he was doing.

Perhaps the reason he carried him is that JD had no collar or leash when he was relinquished. No blanket, no toy, nothing at all. He did have his pet store "papers", but those were of no use to him.

The day after he was left, JD was neutered, had HW and fecal tests, and was given all of his vaccinations and preventatives. It would have been a very rough day for any dog, even one who went home that night to his family and his own safe bed instead of a cage in a shelter.

Over the next few days, JD sat in his cage recuperating and and waiting for his owner to return and take him home, but his spirits lagged a little more each day when nobody came for him. He stopped eating, and he stopped showing interest in potential adopters who looked at him. Being left in that shelter broke his heart.

On the evening of the 6th day, I adopted him, and the rest, as they say, is history. 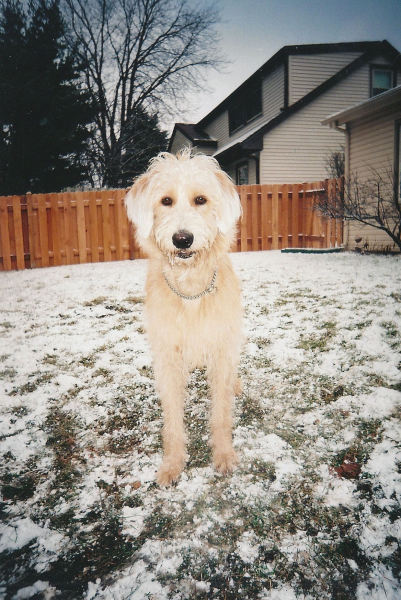 He rode beautifully in the car. He had the run of the house from day one. Not one accident. Not one thing chewed or damaged. No jumping, no counter surfing, no digging, no garbage tampering. He didn't chase the cat. The most perfect house manners anyone could want. He had no idea how to walk on a leash, but he knew "leave it", "drop it", and "wait". And he was adorable. I couldn't figure out why anyone would have given him up. His groomer asked me "How in the world did you find this dog in a shelter???"

He isn't perfect. (And that's really the point of this whole blog. I'm getting there.) He sheds worse than any dog I have ever known, including all of my German Shepherd fosters. He's quirky. He's not the most brilliant dog I ever owned. He had significant fear issues, he was undersocialized, and he turned out to have mind-boggling health problems.

I can't imagine life without him. I love him as much as I love my children. Differently, but just as much.

And I believe that he loves me. But he looked for his original owners for a long time after I adopted him. Although I never met them and know nothing about them, I know what kind of car they drove, because for months, when we were out walking, JD would stop beside any black or dark blue mid-size SUV and wait to get in. I drove a silver sedan.

Over the years, I've often wondered what it was that caused him to lose his first home. I've also wondered about his first owners. I don't think they were bad people. They left him at a very good no-kill private shelter and gave him a chance to find someone who could do right by him.

I wonder if they bought him because they had read or heard that Labradoodles are the "perfect dog". I wonder if they were told that he was non-shedding and hypo-allergenic, that he was going to weigh about 50 lbs, that he wouldn't need a lot of exercise, that he was so smart he wouldn't need much training, and that he was healthier than a purebred. Maybe they were unprepared when he shed hair all over everything like crazy, grew to be 26" inches tall and 70 lbs, (he's now 80 lbs), pulled them down the street like a freight train, licked his paws raw, and needed to chase a ball at full-speed for an hour a day. Maybe they gave him up because he just wasn't what they had been led to believe he was going to be, and they weren't equipped to handle what he was: a dog.

Maybe the reason that a good dog lost his home was "failure to meet expectations."

JD and I are going to celebrate our 8th anniversary on Friday. We'll take a walk, play some ball, and tell each other how glad we are that we found each other.

I hope we get to keep doing that for many more anniversaries to come.

I also hope that you will remember JD when someone asks you about your doodle. It is so easy to rave about them. We love them. We think they are the sweetest, cutest, most wonderful dogs in the world.

But they are not "perfect",  they are dogs, with all of the challenges and needs of every other kind of dog. They need training, they need grooming, they need time and attention, they can have health issues, they get dirty, they get sick, they get into the garbage, they jump, they bark, they dig, they eat things they shouldn't and then they throw up on your rug. And yes, many of them shed and affect their owners' allergies. They are not easier to own or care for than any other kind of dog. And they are definitely not "teddy bears" or stuffed animals.

When we talk about them as if they are something more than, less than, better than, different from, or somehow something other than dogs, we do them a great disservice. Because sometimes, that makes people who really don't understand or like dogs very much think about getting a doodle, and when that doodle isn't perfect, when he fails to meet expectations, when he turns out to be a dog after all, he might just end up with a broken heart.

In honor of our 8th anniversary, JD and I would like to ask all of our friends here to help us make sure that no doodle ever gets left in a shelter again because he wasn't what his owners wanted or expected.

Thank you. And please hug your doodles for us.

The first part of JD's story breaks my heart - the same story as so many dogs have - abandoned by their owners.  There's no way I can or would keep all the dogs that I've fostered - so I think the best thing I can do is just that - foster them and make sure they find the best homes possible for each.  I've been so lucky working with rescue's that diligently check applications and references so that the fosters go to people that will love them and care for them well forever.  One thing that I've experienced is that people do have preferences about size, coloring, sex, activity level and other attributes - but it still comes down to personality; dog lovers will love their dogs and will talk them up as being the perfect dog because in their mind their dog is perfect (and of course nothing is perfect).    Even if over breeding didn't exist I still think that rescue's are the best resource for someone wanting a dog - the pets have been evaluated by their fosterer, obvious health issues are known and the dogs have generally been socialized to other dogs along with humans and received some training - so people don't get the surprises that they aren't prepared for.  I know that so many people aren't familiar with rescues (I wasn't before becoming a fosterer) and I hope that whenever people are talking about their pets they talk about rescue organizations and point out the many benefits.  Regarding Jody's post below - I have a Jackapoo and have fostered Labra and Golden doodles - so far all have had more of the non-poodle personalities than only poodle - though some of the poodles I've had weren't completely poodleey either.

Comment by Jody J. Lambright on January 30, 2014 at 6:57am
Just read your wonderful story! I do want to say that the breeder told me Gus would be about 50 pounds full grown. He is down to 96...They called that one wrong. But he is loving and that's all the matters to me! Doodles are wonderful dogs, but they do need "work" because they are active, busy, inquisitive, with energy busting at the seams. Gus is my first doodle, but I don't think my last. I was shocked at how different he was than my poodle, but I learned fast, and he has become a great companion.

Congratulations on your 8th anniversary, I pray you have many more.

JD has an amazing expression and eyes.  Nancy justly commented that he looks "scholarly"; I might add inquisitive or intuitive.

A match "Made in Heaven" you two.

Your story and Nancy' story are the reason I know to say all that you said. It is very hard for me to do this knowing how perfect your two are with your doodles but I know that incredible people are the only ones that come out on the other side with the perfect matches.