Chance and His Forever Family 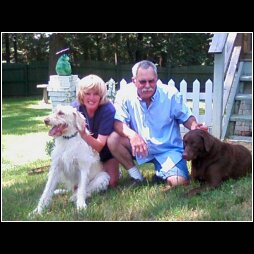 Yesterday was a red letter day in Chance's life.  He was Adopted!!!  The Luten family in Elkmont, Alabama met Chance and made him theirs.  The Lutens have a chocolate Chesapeake Bay Retreiver named Max who is as big as Chance but heavier.  They had applied for Chance back in Januarywhen he was first with the DRC, but didn't get him.  This was their "Second Chance" for Chance.  (Yes they say they are keeping the name)  We couldn't be happier.  The fur boys got along like they were litter mates.

Tom called me last night to say that everything and everyone was still settling in.  The boys had been for a truck ride (the first for Chance), played in the hose, (a first for Chance), chased each other around the beautiful huge back yard (a first for Chance) and then settled in to chill on the sofa with his new Mom and Dad.  Max even "shared" his "binky (blanket that he carries around) with Chance in a tug of war.  Tom told me he's feeling a little left out but I told him the newest will wear off and they will both adore him.  Does life get any better than this???  Yes!!! Today he's going to the lake for his first swim and maybe a boat ride.  Somehow I wish the Lutens had adopted me, too.  Thanks to all who wished Chance well and special thanks to Karen who found this "old" application and made Chance's life a 1,000 times better and to the DRC who made this happen.  My boys miss him too, who wouldn't, the big galute, but he's in his forever home the way it should be.

Chance you are perfect in every way!  Have a wonderful life with your new family.

Comment by Kathy Janes on May 31, 2011 at 8:48am
I love hearing this!  His life should be good now, and he'll live up to it.  Hooray for happy endings!  (and for hanging on to those good applications that just weren't the ones for "that" dog).  Goodness unfolds like a flower!

Comment by Kristen Fuhrmann on May 30, 2011 at 3:45pm
This is awesome! Im so happy Chance has such a wonderful forever home! He deserves it!

This has made my weekend! The Lutens application came in too late the first time around, but it just goes to show you that what's meant to be, will be!

Happy Tails to you, Chance! May you live happily ever after with your fabulous new family!

Comment by Kim and the doodle boys on May 30, 2011 at 9:12am
Yay Chance!  What a wonderful life he is having already.  Thank you to everyone for finding the perfect home for him.