Catching Up With Luna Foster Doodle

Well, Luna continues to be prove herself to be one of the sweetest doodles I've ever fostered. She certainly still has her issues...and lots of them...but I definitely see small pockets of progress.

On January 16th, Luna started her heartworm treatment. She'd been on doxycycline for five weeks prior to that initial injection. Luna is my first heartworm positive dog and I just didn't know what to expect. Would she be in pain? (yes, a bit - it's a large, deep injection) Would…

(posted this week on DK, apologies to DRC...forgot to cross post!!!)

Luna came into the DRC rescue program with her (suspected) sister Stella (and they are aptly named...these dogs will be someone's moon and stars!). I of course don't know what happened in their 2+ years beforehand, but some horrible person did a real number on these girls. I had both Stella and Luna for about a month and while Stella is more outgoing and less fearful than Luna,…

The Importance of a Single Word

So Yankee Doodle has been with his new family about 10 days now. Yankee's new mom, Wanda, and I are friends on facebook and I've greatly enjoyed reading her posts about Yankee, seeing the pictures, and emailing back and forth about various things (I love keeping up with my fosters like that!). This morning Wanda posted a statement that has just stayed with me all day, and who but my beloved DRC family could understand why this resonated so strongly with me!

Sweet Ruby Foster Doodle went to her forever family this weekend! Ruby is such a good girl and her new family is absolutely thrilled with her. They are getting the first hand experience of how being ill-treated for the first three years of her life is NOT going to get Miz Ruby down! She has way too much goodness and love in her for that! So please, join me in wishing Ruby and her new family, the Walkers, every happiness in the world!

Another dog was available for fostering,…

More on Ruby....a gem of a foster doodle!

It's three weeks today since Ruby came to the ATL to get fostered and WOW has this girl adapted quickly! Not only is she ridiculously, absurdly gorgeous, she has the calmest, sweetest nature (possibly ever).

Callie has been doing a great job with teaching her foster sister how to be a proper doodle, and there's been some things that Ruby has learned on her own. Under Callie's tutelage, Ruby now likes to lounge on the sofa with her big noble head in my lap. She patiently…

Ruby Foster Doodle in the ATL

Ruby is a sweet (SWEET) 3 year old labradoodle. She was pulled from a high-kill shelter in North Carolina (thanks, Michael G!) where she had been turned in by her backyard breeder "parents". That's right...Ruby was used strictly to breed litter after litter of puppies and then was turned into this high kill shelter when her "usefulness" was gone (If you can't read between the lines, I hate these people. I can't put it into gentler, more PC terms...people who irresponsibly breed dogs so they…

Appreciating the DRC and being given the opportunity to help!

Ten hours, five emails and a phone call. That has been the first step in saving a doodle's life. Here is the chain of events...

12:30 am(ish) Jacquie gets an email from Michelle with a petfinder link.

1 am(ish): Jacquie sends an email out to me, Kristen, and Nina, asking one of us to follow up in the morning.

6 am(ish): I look at the email and link, and email out that I'll call the shelter

10 am(ish) After impatiently waiting for the shelter to open, I call and…

Last night, Gus went home with his forever family! Carrie and Karl (Gus' new folks) drove down from Asheville, NC with their miniature poodle, Rerun. I have to confess that I fell instantly in love with Rerun, a real spitfire of a little girl. Also - she's kind of a tan color that went oddly well with my decor and she just sort of looked like she belonged! (I almost sent one of my throw pillows home with them because Rerun looked so good next to it!). A little bit about Gus' new…

Gus the Foster Doodle, aka The Big Lump of Sugar

As you may have read in Nina's blog "Gus Has Been Sprung", Gus is 3(ish) labradoodle boy. Nina and her DD drove to Piedmont, AL to pick him up on Tuesday, and Nina got him vetted, let him have a slumber party with her pack and then got him groomed. Our normal foster drill has Callie at a neighbor's house while I bathe the new foster and try to get him settled in and then trying to keep…

RANT (alternate title, WHAT IS WRONG WITH PEOPLE???)

This morning I spoke with a shelter in Alabama (roll tide!) who posted an adorable labradoodle named Gus on petfinder. I was asking the shelter's rep a lot of questions and found out the following.

Gus is an owner surrender, done very hush-hush because he belongs to a friend of someone on the city council (so no names are involved and we can't get past vet records).

The reasons listed for the surrender are:

Wednesday evening Harvey will be going to his forever home! Kim came and met Harvey last night and it was love at first sight! Kim is an experienced dog owner and understands that while Harvey is still a bit of a diamond in the rough, he IS a diamond!

Harvey was equally smitten, and by the end of the evening was snuggling with his head on Kim's lap. I let her see calm, snuggly indoors Harvey and goofy, energetic dog-park Harvey. She loved both.

UPDATE: Harvey is meeting his potential new mom Monday night! This is a wonderful woman named Kim, who has a 14 year old standard poodle (sadly, she lost her 10 year old standard this past year). She's met several doodles and loved them, and is super excited about meeting Harvey. I'm very excited for them to meet, and love that she is local and can come and meet him (the transports are wonderful tools, but they make me sad)! In my conversations with Kim, I feel like she's a doodle mom just…

Oh, sweet Harvey (or "Harvitee Hoo Hoo" as I tend to call him). Every day I look at Harvey and see so many good changes, and see that more of his fear has receded.

Many of my neighbors got to meet Harvey the first night I had him. He managed to slip his harness when we went outside and it was a group effort to retrieve him! I am VERY fortunate to live on a street and in a community filled with dog lovers (my block has 18 townhomes...and there are a total of 11 dogs)! None of…

Harvey Foster Doodle - What a difference a week can make!

It SHOCKS me to realize that I've only been fostering this sweet boy for a week, because he has made SO much progress...progress that I didn't expect to see for several weeks.

Harvey now prances. Words fail me when I see him trotting alongside Callie and they both have their heads and tails raised high, gazing confidently about. He's letting down his guard enough to be a little goofy sometimes. He completely eviscerated a stuffed toy - he was so proud you would have thought…

Hi all - Harvey is coming right along and I'll write a longer update this week. Mostly, I just wanted y'all to see how cute he is! He has an incredibly handsome face and is just brimming with sweetness. He's still scared of some things, but is making great progress! He's getting groomed tomorrow, so I'll post new pictures after that!… 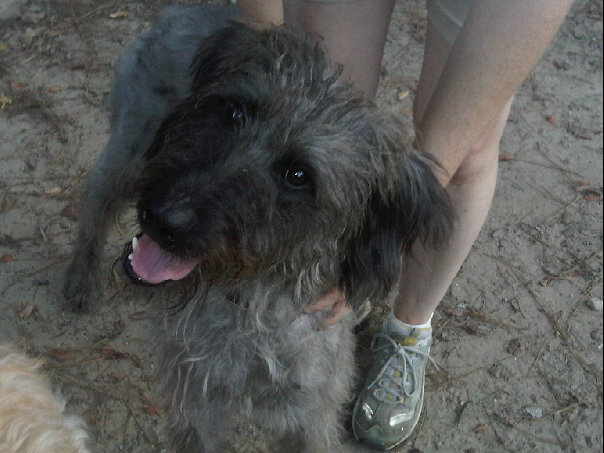 I've said it before and I'll say it every time I foster, but if Callie wasn't Callie, I would never be able to take a foster. She's easygoing about the process, helps the new dog learn the "rules" of the house (ok, she mostly tells them that everyone sleeps in the bed and everyone gets on the couch), leads by example, shares (but doesn't take any guff) and is generally the BDOC (big doodle on campus).

Fostering has a natural end. As a human I know that this dog who has been a…

The Rescue of Bixby Foster Doodle

Hi guys - Liz asked me to post this email I sent her as a blog, so that people can get a better understanding of what our foster dogs and parents go through. A little background...wonderful Melanie Fincher drove to Athens TN on Wednesday to pick up a labradoodle named Motley. She and I met in a shopping center parking lot to do the "hand off" on Wednesday night. Consider yourself warned...this is long. I've also added some bits at the end about Bixby's second day and part of his… Continue