Maltese Rescue California - Cookies' Got Wheels. Cookie is one of our recent rescues who is paralyzed in the rear legs. Until now Cookie has been only able to scoot around on her bottom or sometimes her hind legs. With her great attitude, she is full of love and life. With contributions from supporters we were able to purchase Cookie a wheel chair to increase her mobility. Cookie loves to walk and see new things in her new wheel chair. Here is a short video of her first experience in the new…

Update On Charlie From Arizona

The niece of Charlie's Arizona Foster Mom traveled to California on Thursday and brought Charlie.  I met Charlie in San Bernardino and brought him home.  That saved me a trip to Arizona to pick him up and I am very grateful.

He's a very nice boy who has a problem with his left rear leg for which he has seen a vet in Arizona. …

Better Than A Superbowl Commercial

Please let your friends know about this commercial on the Academy Awards as so many people record shows to avoid the commercials.  This little dog, probably Maltese/Terrier mix was rescued from the Devore, California Shelter in San Bernardino.  This is definitely a high kill shelter.

This is a heartwarming story and hopefully will gain interest for rescue dogs...

You Tube Video Of Our Foster Poodle Mix Dogs...

Hope For Paws has produced a YouTube Video on the rescue of Elmer and Elsie from a scrap metal yard in Compton California.  Eldad Haggar  and Lisa Arturo rescued these two dogs and Judy and I are fostering them.

The video has been viewed over 125,000 times in the two days it has been online.

It gives me a warm fuzzy feeling to watch this video with Elsie on my lap,  Both dogs come when…

I just received a very welcome email from Ken Haworth saying, "I hope you remember Coco, I love this dog!"  It had a short video attached which I don't know how to attach.  We had fostered Coco until that wonderful doodle was adopted by the Haworths...

Sully met his furever mom, Olga, and doodle sister, Chloe, tonight and it was love at first sight all around.  They will stop by tomorrow to pick up Sully for the drive to his furever home in Tucson. We will miss that wonderful boy but, we are thrilled about the quality of his new home...…

Olga, Sully's furever mom is driving from Tucson, AZ to our home in Escondido, CA, today to pick up Sully.  She is bringing Sully's, to-be, doodle sister, Chloe, to meet Sully.

We are excited about Sully finding a furever home but, it is a bittersweet feeling because we have grown to love his wonderful doodle who has lived with us for the past couple of months.

Through the combined efforts of Doodle Rescue Collective, Inc. folks, we have saved another doodle from euthanasia.  Bentley, a beautiful (photos coming soon) dark Labradoodle was pulled from the Agoura, California shelter where he was scheduled for euthanasia.

He is being driven South by DRC, Inc. volunteers and I will pick him up today somewhere north of my home (at a point yet to be determined) and bring him to stay with us until he can find a furever home for him.

Sully (Sullivan) is a wonderful seven and a half year old Goldendoodle whose owners did not want him.  They tried to turn him into the San Diego Animal Control Shelter but they were told that the shelter was full and would only accept aggressive dogs for euthanization.  The (expletives deleted) owners said, "O.K. he's aggressive, kill him!"

I did this poem in honor of a brave little dog and all of the other rescue dogs in the world. I did the video, as well, in honor of all the wonderful and dedicated volunteers, from all organizations, who work diligently to save the lives of rescue dogs...

Our darling foster Labradoodle Cocoa took a trip to the beauty parlor today and Maureen, of Ye Olde Poodle Parlor, in San Marcos, CA, did a great job, especially considering how badly this girl's coat was matted.  Maureen reported that Cocoa was one of the nicest and best behaved dogs she has ever groomed. 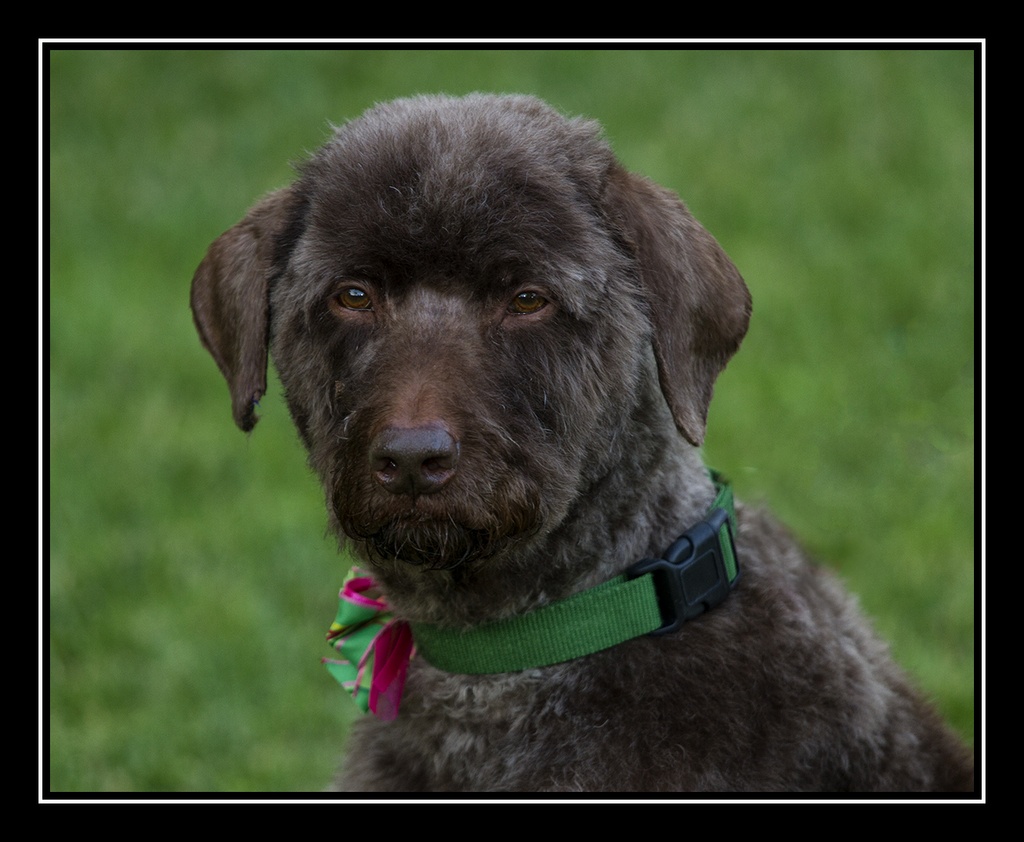 Due to Cocoa's terrible coat condition, Maureen was forced to…

Cocoa as a foster

I picked up Cocoa from Kelly in Lake Forest about noon today and you would think that she has been with me all her life.  She is a darling dog who is badly in need of grooming but that will happen.  Right now she is on an antibiotic regimen for a puncture would on her face (which might have been caused by nip from another dog), Kelly, who is a vet, treated the wound and gave me the antibiotics to give Cocoa.  We don't want to have her groomed until the wound heals.…

Sophie Grace was adopted by Petco's CEO & Chairman of the Board & his family in late 2011.  I mentioned her at a Petco Rescue Luncheon and the Manager of the Petco Del Mar, CA, store said: "I see Sophie all the time.  They bring her in to get her a toy or something else. She's one happy pampered doodle!" That made my heart feel great!…

Bailey and her new family...

Bailey met her forever family; Tom and Sydney with their doodle, Hailey when they drove down to pick up Bailey.  She immediately bonded with Sydney and Tom and idolizes her new big sister, Hailey. 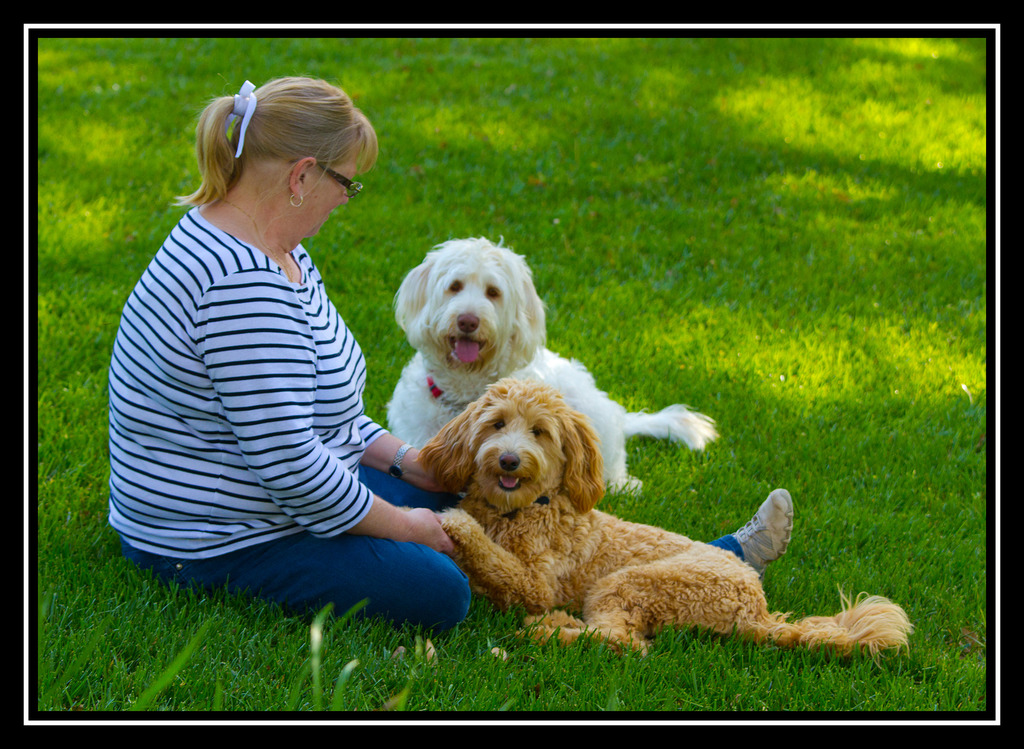 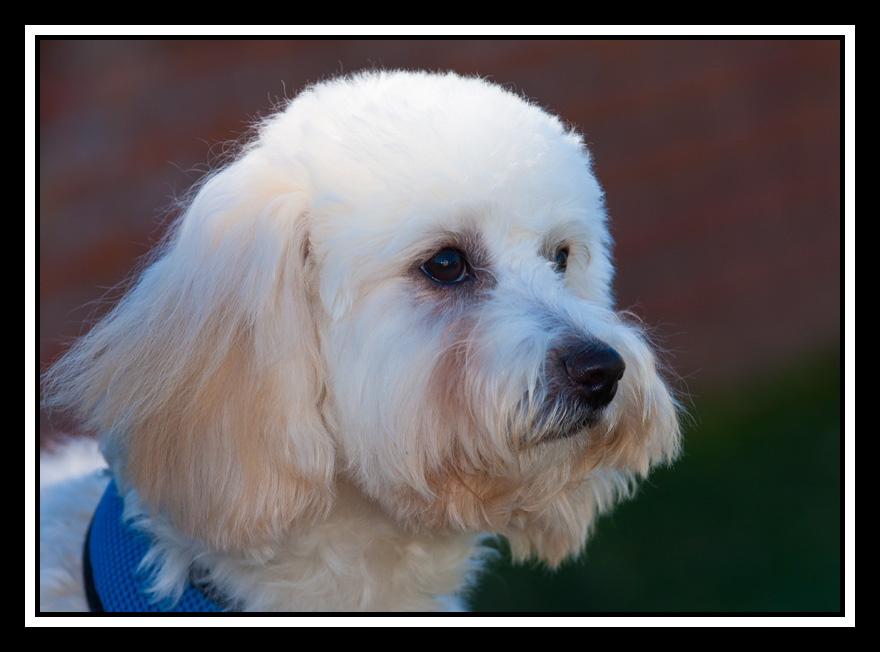 We honestly don't know Tanner's heritage.  We have listed him as a poodle/golden retriever mix.

But he could be just about any poodle mix.  However, he could easily be our goldendoodle, Holly's son because he looks and acts…

We have a rescue who lived seven and a half years in a puppy mill cage.  She has made remarkable strides in socialization.  However, after eating, she will urinate in her food bowl.  We believe that this is a marking behavior to signify that the bowl is hers.  We try to remove the bowl as soon as she has eaten but, is there any other way to prevent this behavior.  She is emotionally very fragile so scolding her is not an option...

It is very unusual that Judy and I are not on the same page when it comes to potential adopters.

However, yesterday, we met a couple with two boys, five and eight.  I really thought that the five year old was three because of the way he acted.  He would run around with his arms outstretched shaking them. Even when he met me, he came over stretched out his arms to the side shoulder high and waved them. I still think that this boy was hyper or had some other type of emotional…

We at the American Maltese Association Rescue have finally got our web site up and running.  We are going to add a page of links and link Doodle Rescue Collective, Inc.  Visit us at www.americanmalteserescue.org and give us some feedback regarding our new site...

The Maltese that wasn't...

As some of you undoubtedly know, Judy and I rescue Maltese as well as Doodles.

Judy got a call several weeks ago regarding a Maltese puppy that had a broken leg and was in a cast.  She was asked if we would foster her.  We were up to our eyeballs in fosters at the time (nine fosters plus our own four Maltese and Holly, our Goldendoodle).  However we can always find a place for a puppy.

We met the person in Oceanside, CA who had brought the "Maltese puppy"…

I just received a phone call from Paula Woo who adopted the Goldendoodle puppy we rescued from the Hesperia Animal Shelter.  The shelter called the puppy Chloe and we changed it to Zoe because we had another Chloe in the house. Anyway, Paula's poodle is named Zoe so the puppy ended up being named "Carly".  Paula needed documentation of the spay for L.A. Animal Control licensing.

What wonderful news!  Paula reports that Carly is getting along marvelously and that everyone…