His furever home will need mature, dog savvy adults and he'd love an older doggy brother or sister. He's been with us just a short time but fit in perfectly with our pack and is a well behaved and cooperative pack member. He needs a quiet rural environment as he does not do well with strangers unless they are gently introduced.

He will need leash training…

Oliver is a 28 lb. mini Labradoodle that was originally purchased from a man outside a fast food restaurant by a family with 3 children under the age of 5. Like all puppies Oliver had razor sharp teeth and nails and like all puppies loved to bite, taste, and chew on anything and anyone that came within reach. This perfectly normal behavior soon landed Oliver in the back yard where he stayed for 4 months until his owner decided to sell him on Craigslist.

Oscar has just come into a foster home in LA, rescued from a shelter as a "lost" dog found wandering the streets.

Despite this rough luck his foster mom reports that he is very friendly with a sweet nature, fully housebroken, knows a few basic command but will need leash training.

Oscar is 36 lbs. and neutered and really looks like a love bug!

With a fresh haircut:…

Buddy is a 1 YO M/n Australian Labradoodle that we took into our home last week for fostering & training. Buddy and his sister Scout were left in a backyard for a year, he had no contact outside his immediate family and no obedience training whatsoever.

Despite a rough start he is a friendly and very intelligent little guy with stunning green eyes! He is very shy with strangers but not unfriendly or aggressive. Even though he never lived indoors he is housebroken due to…

Kimo's first hike with us.

Kimo is our latest guest at puppy boot camp. His name is the Hawaii'an form of James or Jim and he is an intelligent, happy, healthy, high-energy, and very sweet 60…

Bogey in the snow

Bogey spent his first 5 years trapped in a back yard in the Central Valley of California where it rarely snows more than a dusting. This past week we took Bogey and his foster brothers and sister to be groomed since all were looking a bit shaggy and on that day we had our first real snowfall of the winter, about 6". Bogey took right to it following the others outside on a nice winter walk down by the lake.

Looking snazzy here with his fresh haircut and borrowed…

1st week has gone incredibly well. He listens and understands the house rules, gets along great with our dogs and anyone he meets: adults, children, and other dogs. Really a big sweet puppy that just needs an active family.

Posing with our family for a Christmas card:…

Bogey is a 6 year old neutered male Labradoodle. He's a happy, energetic, 72 lb. pup that had to be re-homed since he is a big guy who really didn't fit well in a city home. Bogey needs a lot of exercise so a place in the country with a large fenced yard or easy access to open space would be ideal.

He loves people and he gets along nicely with our 3 permanent doods, he's very non-aggressive and just a happy dog.

Sammy had a fun week!

Sammy had a fun week last week, first 3" of snow to play in then warmer weather and camping in the Sierra Foothills followed by a romp in Lake Tahoe. This was a week of several firsts for Sammy, he saw horses and riders on a trail right next to our campsite, then a family of 3 ducks walked by on the road. In both instances he watched closely but did not react, no growling, barking, or lunging. He's a smart boy and we could see the wheels turning in his head as he watched these strange…

Sammy and foster Mom Susan on a bike ride: 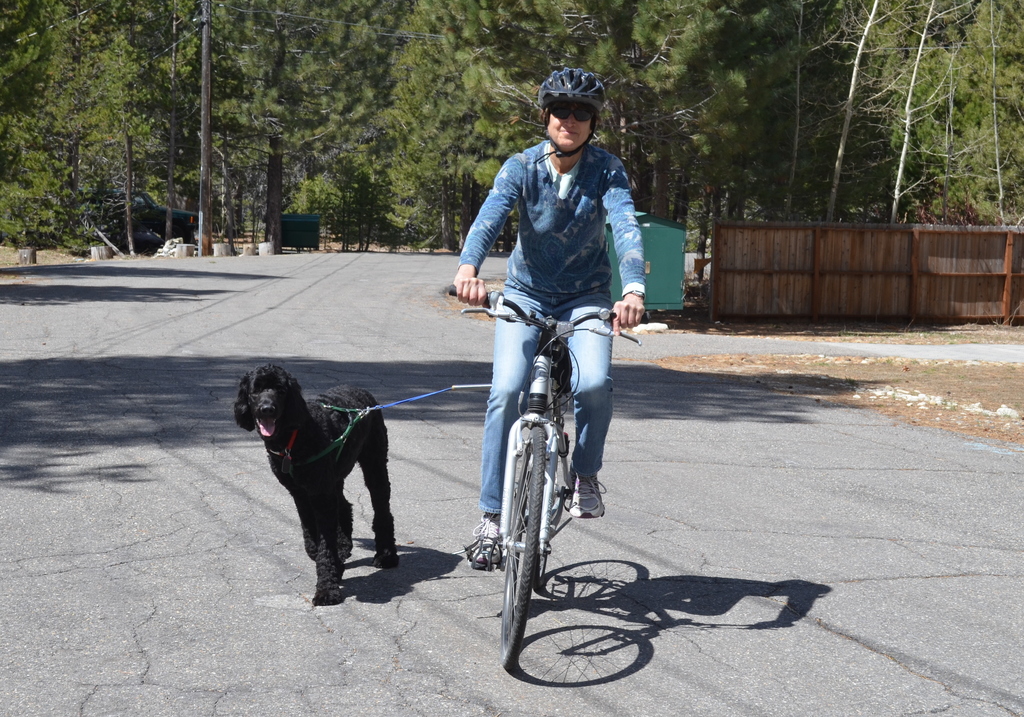 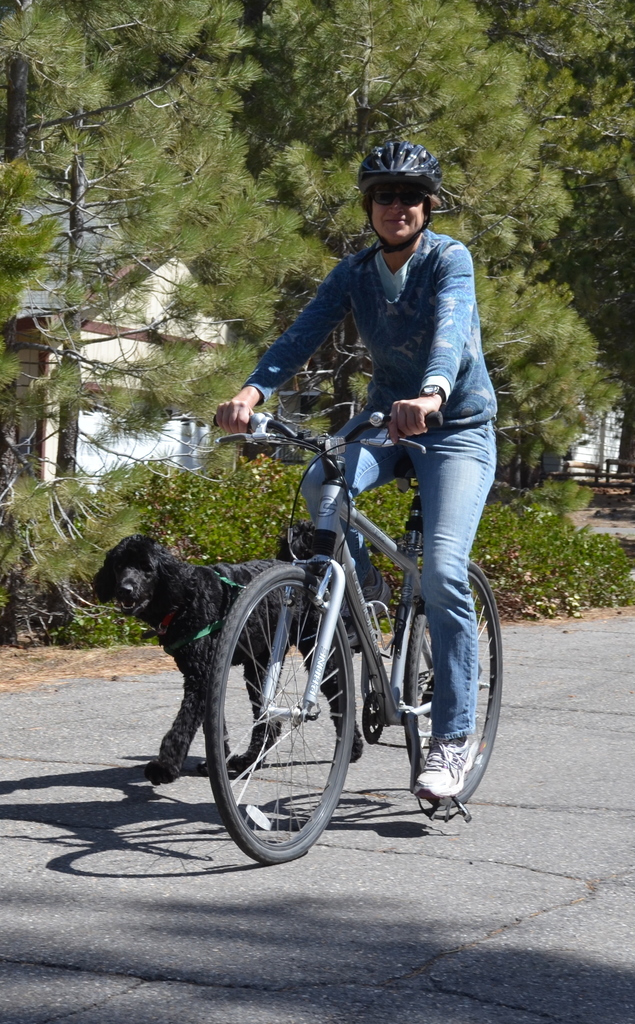 Hanging out in the back yard:… Sammy is a 1 year old neutered male Goldendoodle. He's a happy, energetic, 75 lb. puppy that had to be re-homed since he was a little too much dog for his elderly owners.

He is very people oriented, gentle, and eager to please. He hasn't had much exposure to other dogs but with 3 permanent doods in our home he is quickly learning how to share the spotlight.