Wow! It has been a little over 2 weeks since we brought Norman to his forever family. I've been meaning to sit down and post for a while now, but we've been trying to get back to our pre-Norman schedule & it has been a little bit of an adjustment.

We had him two months, so he had plenty of time for his skin to heal. We're definitely missing him at our house, but we could not have asked for a better family for him!

He has a new big brother, a Great Pyrenees,…

Maggie and Fozzi are now pretty comfortable with each other.  They take turns chewing on bones.......that says quite a bit.  Fozzi had a rough week in the sense that he wasn't eating much and his tummy was making some strange sounds.  Couldn't figure out what was wrong with him.  He would eat a bit and then stop.  Finally, the night before last I go upstairs to find that Fozzi had thrown up and entire sock.  It wasn't even chewed up.  I have no idea how he could get it down, let alone get it…

Confessions of a Foster Failure

Yup, that would be me. I know you must be thinking “OMD! It can’t be true!” Ah, but I am happy to say that it is. Miss Lacey (formerly Lucy) has officially become one of the Whitefield Pack.

This poor, stoic girl has gone through so much in her short 3.5 years. First to be born in a puppy mill and then being bred every single time she came into heat just to line this a##&)*e’s pockets. Then to add insult to injury, once the puppy miller was done with her, he/she dumped this…

Tom and Carol Horner along with their two beautiful babies, Auggie and Oliver welcomed Elmo into their home recently.  Carol has been kind enough to send me several emails along with photos to keep me informed on Elmo's progress.  I am happy to report that Elmo is doing wonderfully and is charming everyone!!  He has settled in nicely and gets along well with his new brothers, Ollie and Auggie.  At his first visit to their Vet's office Carol wrote that Elmo charmed everyone there...clients…

I got the message a few days ago that there was a doodle that needed rescuing from a shelter close to me, so of course, my only answer could be when, where? Oh the emotions running through my mind with this being my first rescue and foster!  What joy! What fun! Than I went to the petfinder sight and the only thing they said about him was he does not like windshield wipers! What did I get myself in for! We arrived at the shelter, got the paper work done and am still wondering about this 77…

Sweet Sonny the Goldendoodle...looking for his forever family!

Having lost our beloved Wheaten, Duffy, recently to PLE, a horrible disease, our family was feeling a big void. I'd always fostered while we had Duffy, so we figured - why not continue to do so until we are ready again for another forever doggie addition!  So, on Mother's Day my gift was fostering sweet Sonny, the beautiful, graceful (he prances- literally!) 11 month old 'puppy' from a life in which he seemingly spent 24/7 in a crate. He didn't seem to know how to 'play', didn't know…

Sonny the Goldendoodle is ready for his forever home! 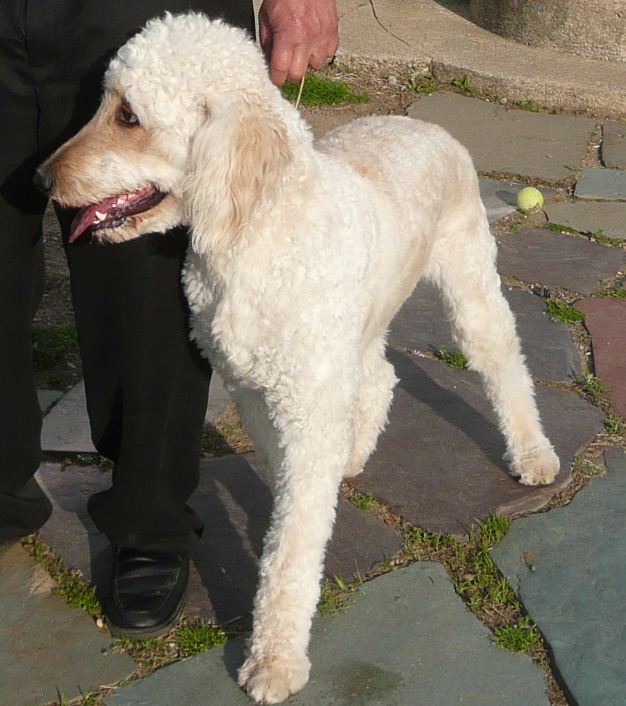 Hello- I am a member of Doodle Rescue and have a black doodle, whom we rescued 2 years ago.....very best dog we have ever owned!

My daughter/son-in-law are looking for a doodle to adopt and we all live in Dallas TX. They really like the apricot color as well as the larger(standard) size, but would open to other doodles in need of a home.

Please contact me with any help in this regards!

Rudy Adopted and moving to his new Kingdom

Today Rudy met his new family, Ruth and her daughter Kat drove 8 hours yesterday, spent the night in a motel near me and arrived with a beautiful collar, leash and name tag!

Rudy showered them with his special kisses and even did some kangadoodling to show off.  He is now on his way back to GA to meet his new brother Theo.  Theo and Rudy,  how perfect- just like the Cosby Show.…

Chelsea Got the Zoomies

Chelsea's personality is starting to come out.  Chelsea played with a toy and chewed on a bone for the first time yesterday.  This morning I let her outside with Clover and all of a sudden zoomies.  At times Chelsea was spinning in a circle so fast all her paws were off the ground.  Clover's head was going round and round trying to figure out how to join the fun.  Watching them made the whole family laugh, what a great way to start the day.

This is why I foster.  Watching a scared,…

On his way to meet his new family! We are going to miss…

I just can't say enough about Chance, my latest foster.  Chance came to live with me and my fur boys on Saturday from his foster Mom Kristen in Alabama.  Kristen is getting married this week and was going to have to board Chance while all that was taking place.  But as the DRC volunteers always do, she put him first and put out a call for a home.  That's where Jeannine and Jacquie came in, and me, too.

Chance, so I was told,  suffers from separation anxiety when he is the… Easter with Coda (black labradoodle), Capo (white labradoodle) and foster puppies Hillary and Hudson, who will soon be going to their new homes.

Well, it is usually the black doodles that are hard to get good pictures of but the illusive Lola has been camera shy for almost a month now.  In the last few days she has let me snap a few and we thought we would share.  (It's not that she is really that shy around the camera, I just find myself enjoying playtime and forgetting to grab the camera.)

Lola is sweet as ever, she makes friends with every person she meets - children and adults - and is especially fond of those…

Cabot is with his forever family

It’s official, Little Joe (Cabot) is adopted. Phil and I met his forever family Saturday afternoon at a local park. Michael & Anna had kept it a secret from the kids. When the kids saw Phil and I walking Little Joe they ran up to ask if the could pet him. Little Joe was more than happy to shower kisses on the children and they loved petting Little Joe. Then Anna said to the kids, “Remember the surprise I mentioned?”. The kids nodded and she said, “This is it. Little Joe is our puppy”. You… Continue 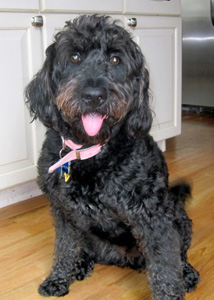 I was able to get some extra photos of Christy today while she was smiling for the camera! It's tough, getting good pics of black doodles, but she's a champ; she put up with me (and with a little help from 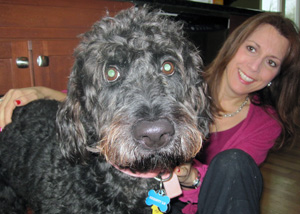 my daughter, Katie). I've decided that "Christy-Lu" is…

Benson and his foster brother Augie… I have the BEST DOG in the WHOLE WORLD and he's not mine!

Brewster has been through so much in the last 13 days and has taken everything in stride.  The morning (Sun) after we arrived home his scrotum (balls) was the size of a softball, off to emergency we went he had a horrible infection.  Mon. off to my vet we went for a check up only to find out that he has a foxtail in his ear almost to the point of puncturing his eardrum, blood test needed as he had no body mass.  Foxtail removal has to wait until he's healthy.  Blood test came back GOOD! …

Rudy the red F1bb labradoodle foster arrived at our home on Sunday night. He is a puppy ( although at 45 lbs) and 26 inches tall ( at the shoulder), you wouldn't believe he is only 11 months old.

Rudy is a re-home. He was purchased from a very reputable breeder in VA and taken to a home with an older doodle.  Rudy has the typical puppy energy and got into some elastic that caused him to have emergency surgery, not once but twice. He was returned to the breeder who gave him to DRC to…