My Story: I Designed a Dog, by Wally Conron 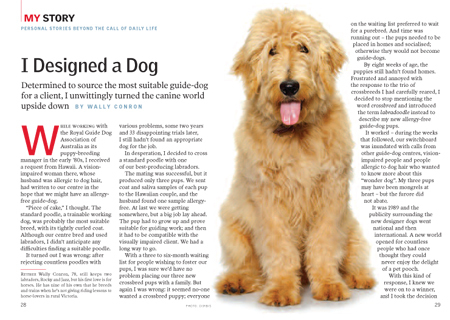 Determined to source the most suitable guide-dog for a client, I unwittingly turned the canine world upside down

While working with the Royal Guide Dog Association of Australia as its puppy-breeding manager in the early ’80s, I received a request from Hawaii. A vision-impaired woman there, whose husband was allergic to dog hair, had written to our centre in the hope that we might have an allergy-free guide-dog.

“Piece of cake,” I thought. The standard poodle, a trainable working dog, was probably the most suitable breed, with its tightly curled coat. Although our centre bred and used labradors, I didn’t anticipate any difficulties finding a suitable poodle.

It turned out I was wrong: after rejecting countless poodles with various problems, some two years and 33 disappointing trials later, I still hadn’t found an appropriate dog for the job.

In desperation, I decided to cross a standard poodle with one of our best-producing labradors.

The mating was successful, but it produced only three pups. We sent coat and saliva samples of each pup to the Hawaiian couple, and the husband found one sample allergy-free. At last we were getting somewhere, but a big job lay ahead. The pup had to grow up and prove suitable for guiding work; and then it had to be compatible with the visually impaired client. We had a long way to go.

With a three to six-month waiting list for people wishing to foster our pups, I was sure we’d have no problem placing our three new crossbred pups with a family. But again I was wrong: it seemed no-one wanted a crossbred puppy; everyone on the waiting list preferred to wait for a purebred. And time was running out – the pups needed to be placed in homes and socialised; otherwise they would not become guide-dogs.

By eight weeks of age, the puppies still hadn’t found homes. Frustrated and annoyed with the response to the trio of crossbreeds I had carefully reared, I decided to stop mentioning the word crossbreed and introduced the term labradoodle instead to describe my new allergy-free guide-dog pups.

It worked – during the weeks that followed, our switchboard was inundated with calls from other guide-dog centres, vision-impaired people and people allergic to dog hair who wanted to know more about this “wonder dog”. My three pups may have been mongrels at heart – but the furore did not abate.

It was 1989 and the publicity surrounding the new designer dogs went national and then international. A new world opened for countless people who had once thought they could never enjoy the delight of a pet pooch.

With this kind of response, I knew we were on to a winner, and I took the decision to breed more of the labrador-poodle crosses. So I contacted the then Kennel Control Councilof Australia, hoping to find the names of reputable breeders who were breeding standard problem-free poodles.

“If you use any registered dog for your programme, that breeder will be struck off the register and never be allowed to show or register their dogs again,” the council’s spokesperson warned. Nor did he budge when I explained that the dogs were being bred to help vision-impaired people.

The breeders themselves were split: many did subsequentely threaten me or propose litigation if I used their progeny in my breeding programme, while others offered their services free to the guide-dog centre.

While all this was happening, I continued training Sultan, the original non-allergenic pup. He eventually went to Hawaii, amid intense media coverage, where as the world’s first labradoodle he bonded beautifully with his new owner and her allergic husband.

Interest in the labradoodle continued to escalate and inquiries poured in from all over the world from people wishing to either purchase or breed the dogs. But

I quickly realised that I’d opened a Pandora’s box when our next litter of ten labradoodles produced only three allergy-free pups.

I began to worry, too, about backyard breeders producing supposedly “allergy-free” dogs for profit. Already, one man claimed to be the first to breed a poodle- Rottweiler cross!

Nothing, however, could stop the mania that followed. New breeds began to flood the market: groodles, spoodles, caboodles and snoodles. Were breeders bothering to check their sires and bitches for heredity faults, or were they simply caught up in delivering to hungry customers the next status symbol? We’ll never know for sure.

Today I am internationally credited as the first person to breed the labradoodle, but I wonder, in my retirement, whether we bred a designer dog – or a disaster!

Retiree Wally Conron, 78, still keeps two labradors, Rocky and Jazz, but his first love is for horses. He has nine of his own that he breeds and trains when he’s not giving riding lessons to horse-lovers in rural Victoria.


Labradoodle, an Intriguing History and Future

To continue the efforts of Wally Conron and introduce the Labradoodle to a wider audience, many breeders in Australia began breeding Labradoodles. During the 90's a number of other breeds were cross bred with the Labradoodle, most often the English Cocker Spaniel and American Cocker Spaniel. It is reported that at least 6 other breeds were introduced, some still found in current lines while others were either bred out or never introduced into the blood lines still in existence today. DNA evidence has found, in very small proportions, some of these crosses.

The ILA is working on guidelines for any member breeder who attempts to introduce any other breed into the current Labradoodle lines. This includes, but is not limited to, justification, details, goals, timeline, reporting of results to the ILA, and upon what criteria these infused Labradoodles may be registered as Labradoodles and introduced to the market as breeders.

Permalink Reply by Ned, Clancy, Charlie, Jinkxy on June 15, 2010 at 10:14pm
I can see why Wally Conron would have reservations about his 'creation' but I certainly am glad for it.