HISTORY OF THE "LABRADOODLE"

The Labradoodle was first deliberately bred in Australia in 1989, when Wally Conron of Royal Guide Dogs Association of Melbourne received a letter from a woman in Hawaii who needed a non-shedding service dog due to her husbands severe allergies to pet dander. 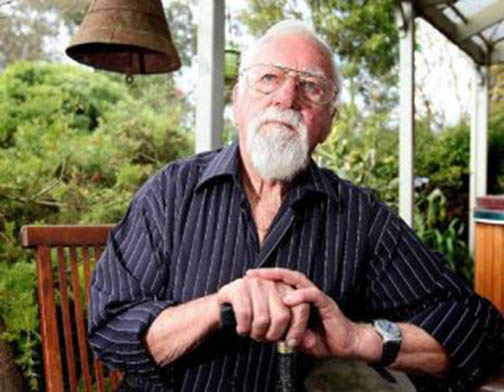 Mr Conron had the brilliant idea of combining the Labrador Retriever with the Standard Poodle. His goal was to combine the low-shedding coat of the Poodle with the gentleness and trainability of the Labrador ultimately providing a Guide/Service Dog suitable for people with allergies to fur and dander. 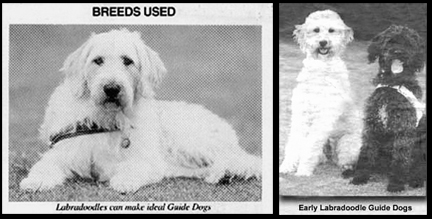 What began was two years of trials with 33 unsuccessful results.

Finally, the results of a mating between one of Royal Guide Dogs most beloved and proven Labradors and a prized standard Poodle imported from Sweden proved somewhat successful with three of the puppies producing low- to non-shedding coats. Only one of the three puppies was ultimately selected for service work.

Sultan the very 1st Labradoodle service dog was introduced to his new owner amidst great fanfare. The pairing was a great success and Conron was confident that the remaining two puppies would also be placed quickly. 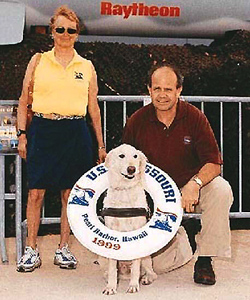 It is traditional for the Royal Guide Dog Association to place their puppies at eight weeks in "guardian homes" with families where they are able to mature with a good socialized background to ready them for their important life’s work. With this Conron unexpectedly hit another stumbling block. None of the waiting families, called "puppy walkers", wanted a “mutt”. They all wanted a traditional Labrador guide dog, a purebred.

As eight weeks rolled by, the remaining two pups still hadn't found homes and the critical window of time needed to bond and socialize these puppies was closing fast. Conron thought that naming the cross would give them a better chance for acceptance.

The name "Labradoodle" was born.

In an effort to increase the ratio of allergy friendly dogs in each litter, Labradoodle was bred to Labradoodle. As a way to describe and identify these dogs they were called “Double-Doodles” and of course Double Doodle was bred to Double Doodle and aptly named "Tri-Doodles".Though these dogs were incredibly intelligent and willing trainees they were strong willed, aloof, high-strung and boisterous. Some were even aggressive and domineering. Few were allergy friendly and fewer still were non-shedding. Overall these early doodles were not ideal family pets.

Additionally the sharing of a number of hereditary diseases carried by both Poodle and Labrador Retriever was already a major concern. It became apparent that continuing to develop the Labradoodle using only these two breeds was a health disaster waiting to happen and was certain to lead to the same genetic dead end already experiened by those breeding recognized ‘pure’ breed dogs.The program was ultimately abandoned by Conron but not before 31 puppies had been bred and raised pf which 29 passed to become service dogs.


FOOTNOTE: Wally Conran has recently openly expressed his regret for being the founder of what has now become a fashionable trend. His regret is based on the now huge numbers of irresponsible breeders crossing every breed imaginable with poodles without any consideration of the health and well being of carrying mothers, pups and future doodle generations. He also regrets that this has now become a very lucrative back yard industry.

SEE "MY STORY-I DESIGNED A DOG" BY WALLY CONRON 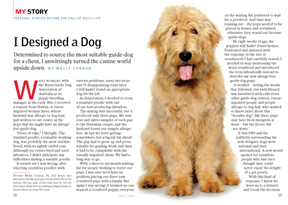 Throughout those early years Kate Shoeffel, a vet in NSW Australia and others were determined to improve the Labradoodle as it had come to be known, to fix its flaws, and to turn it into a supremely desirable family companion. She began breeding first generation (F1) Labradoodles from Labrador and Poodle matings and backcrossing them to Poodles (F1b). Her F1's and F1b's were amongst the first Labradoodles to be exported from Australia to America. 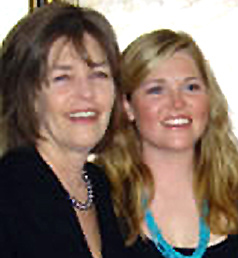 Because of their immense rise in popularity, people began crossing any Labrador with any poodle without any regard to genetics, bloodline, or temperament and calling the puppies "Labradoodles.” The result was an unpredictable variety of puppies with various physical characteristics. The evident need for breeders to develop a standard for this fascinating dog gave rise to the establishment of two Breeding and Research Centers for Labradoodles in Australia. 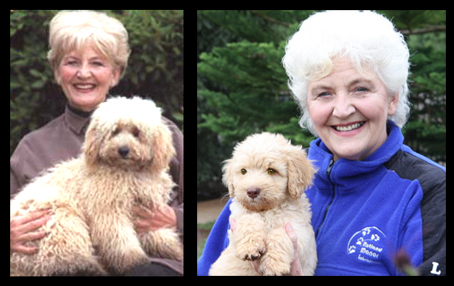 SEE "THE ART OF DEVELOPING A BREED" BY BEVERLEY MANNERS
http://www.alpsdoodles.org/pages/Beverley_breedhist.htm

In 1998, Tegan Park introduced the "Miniature" Labradoodle to the public. When these were crossed with the standard Labradoodle, the medium Labradoodle resulted. Thus three sizes are currently distinguished. 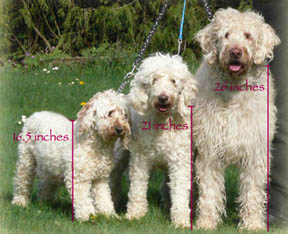 Australian Labradoodles today differ from early generation and Multigenerational Labradoodles bred by Wally Conron and Royal Guide Dogs of Victoria in that they have breeds other than Poodle and Labrador Retriever in their ancestry. English and American Cocker Spaniel/Poodle crosses (i.e. Cockapoos), Two Irish Water Spaniels and Soft-Coated Wheaten Terriers were used in some Australian Labradoodle lines. The Curly Coated Retriever were used too, but these lines did not work out and they were discontinued.

Thanks to Beverley & Angela what ensued was a remarkable yet somewhat misleading marketing campaign that took the world, particularly the United States by storm inducing "Doodle Fever" in the masses. Thanks to the skillfull use of PR combined with the fact that doodles happen to truly be wonderful canine companions regardless of their coat types, the demand for these dogs increased dramatically and virtually overnight. Suddenly everyone and anyone who could get their hands on a Standard Poodle and Lab breeding pair, went into the doodle breeding business. 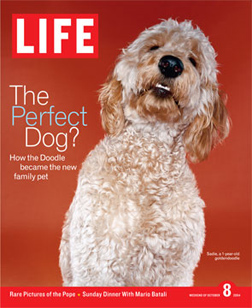 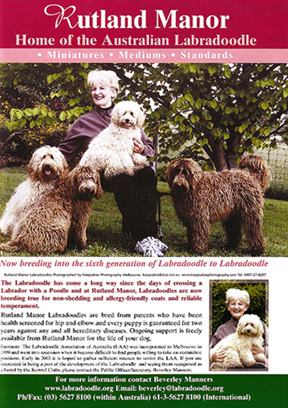 In 2008 Ms. Manners of Rutland Manor and her daughter Ms. Cunningham of Tegan Park had a nasty and very public "parting of ways". Cunningham's bitter divorce and the disolvement of mutual assets acquired during the marriage, resulted in Tegan Park USA doodles and foundation breeding stock dogs worth millions left in deplorable conditions on the Cunningham's Florida ranch. Many dog's were "auctioned" off on the internet...Many were filtered through the shelter system.... Many who were sick and suffering from various ailments including Parvo virus and mal-nutrition died.

SEE LINKS BELOW ON TEGAN PARK AND ANGELA WETZEL CUNNINGHAM

Ms. Manners herself has been accused of running a "puppy mill" operation and has been under investigation by the RSPCA (Royal Society for the Prevention of Cruelty to Animals) since 2008. 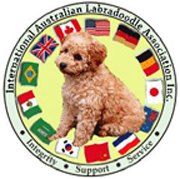 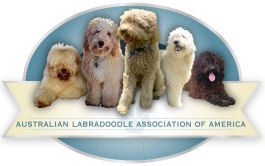 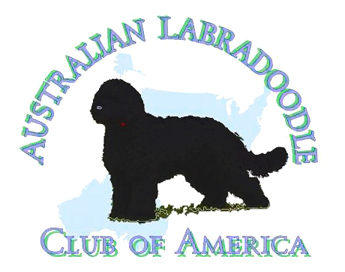 Replies are closed for this discussion.