DON'T JUDGE A DOODLE BY IT'S COLOR! Permalink Reply by Nancy, Ned, Clancy, and Charlie on August 26, 2010 at 9:49pm
Beautiful, rich, shiny, jet black is actually my favorite! My childhood dog was that color and I have such wonderful memories of her. Seriously, my daughter has had people afraid of her black lab as he stands by her panting, wagging his tail and looking friendly! And they tell her it is because he is black!

Permalink Reply by Nancy, Ned, Clancy, and Charlie on August 26, 2010 at 10:09pm
One of these days I will actually get my next black dog. I wanted a black and white springer and ended up twice with liver and white. Then I wanted either a black or red doodle and Ned charmed my hubby. Then we got Clancy and of course he is the opposite of black, so......

Permalink Reply by tracy forgosh on August 27, 2010 at 4:40pm
I love my black nut of a Doodle. I am so glad we became her forever family. She may steal socks, toys, shoes, etc., but she is such a love. She will lick you till you can't breathe. That is why we call her licky Licorice or Licky Picky Pumpkin pie. She is just an awesome part of our family : ) Never turn your back on a dog just because they are black. They are just as loving as any other color of dog.

Permalink Reply by Jacquie Yorke - DRC Director on August 27, 2010 at 4:50pm
Thanks for sharing Tracy!....She is gorgeous and you and your family have given her an amazing home!.....Thank you for finding your way back to us..We are glad to have you as part of our family...

Permalink Reply by Frannie on August 30, 2010 at 11:14am
This whole black dog thing always surprises me. We, as a family, have always gravitated TOWARDS black dogs. My parents have a beige dog right now and they still find it strange because all of their previous dogs have been black.

They are hard to photograph and they can get too hot in the summer. SO WHAT????? You live with a dog, not a picture and you exercise a little more care in warm weather.

I'm actually a little disappointed that Callie's coat has lightened as she's gotten older. She was a shiny jet black when I first adopted her. Now she a color I call "almost black" and has a sprinkling of white hairs on her back and silver stripes on her ears.Below is an example of how "scary" black dogs are! 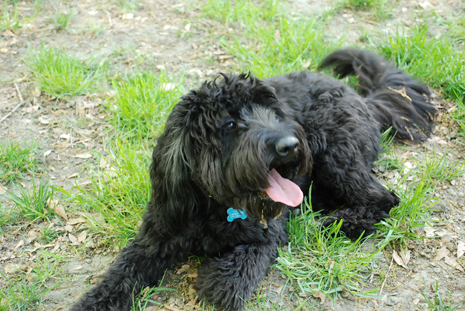 Permalink Reply by Frannie on August 30, 2010 at 12:46pm
I know - being scared of a black doodle is like being scared of a muppet! Callie's a licker too! I'm constantly apologizing to people because she'll walk right up and lick their toes!

Permalink Reply by Nicole Wayne on October 20, 2010 at 4:20pm
I got my beautiful black Goldendoodle Mazie from a breeder because at the time, I couldn't find a doodle in rescue (sadly, that is no longer the case) but I had to wait several months to do so because I wanted a big black doodle! All doodles are beautiful, and if I were in a position to rescue one or more, I wouldn't care what color they were. But the fact remains, I love big black dogs! I grew up with standard poodles. Four black ones and a chocolate brown one over nearly 40 years. Why would anyone not want, or worse, be afraid of a big black dog? I just don't get it! (But I know it is a sad truth.) People sure are stupid sometimes! My only complaint about my darling Mazie girl is that because she's black, she's kinda hard to photograph. But then, I'm a terrible photographer. So really the issue isn't her being black, it's me not knowing how to take a decent picture! I LOVE BBDs!

My Big Black Doodle Hendrix is the most wonderful dog in the world!  Muppet is perfect for him, he reminds me of Grover.  I so want him to have  a big buddy.