Nearly two weeks later...Lucy got hungry enough to enter one of the (humane) traps. Morgan from Forgotten Paws rescue here in the Atlanta area lent us her trap, so we were able to set up two. She also told me that most of the dogs she'd trapped (80 so far!) were lured in by sausage. So, after two nights in a row of sausage, Lucy walked into the trap! She got to eat a lot of sausage to get there, and I'm happy she did!

She's a bit thin, and was scared, but was still very gentle (even when the animal control guy had her on a catch pole, she didn't growl or snap.) I loved the animal control guy who came out. He was genuinely upset that he had to use the catch pole...he was worried it would just be more trauma for her but there was no other way of getting her out of the trap without risking her taking off again so I gave him my permission. I liked that he cared enough to be concerned about her...you could tell it wasn's just a "job" for him.

So now, Lucy Foster Doodle is at the vet getting checked out. The vet won't be able to examine her until this afternoon, but at least she is safe, in air conditioned comfort, and is getting clean water. She smells awful but doesn't really look that dirty (the animal control guy said it was her "fear glands" making the smell). We need to make sure she's hydrated, and that she's not pregnant.

I'm so incredibly relieved and thankful to have her back!

Here's a picture of trapped Lucy! 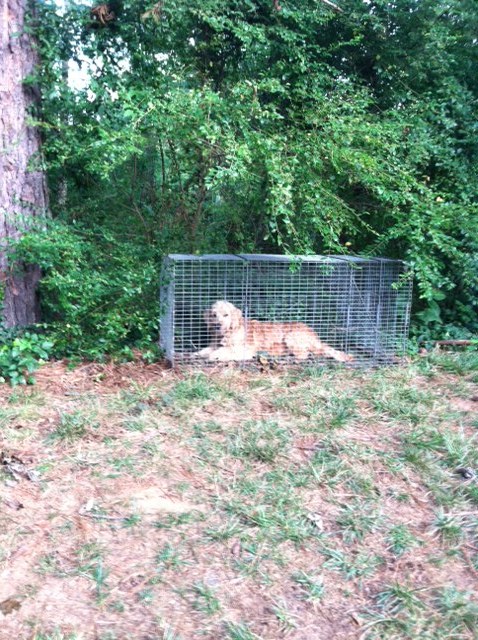 Praise the Lord, she is now safe. Thanks for all your hard work in getting her back to your loving care.

Permalink Reply by Colleen, Jake & Baxter on July 7, 2011 at 2:05pm
So happy to hear she has been found!  Thank you Frannie and everyone involved in bringing this girl back to safety!

Permalink Reply by Andrea Johnston on July 7, 2011 at 6:23pm
I am sooo happy for all of you. Thank heavens she's safe. You must be estatic that she's finally safe. Soon she'll realize that humans can be loving and kind and perhaps she won't want to run away.

Permalink Reply by Lorelei Johnson on July 7, 2011 at 11:37pm
I am so very relieved!! Frannie...thanks for not giving up on this girl! Clearly, she needs you!

What wonderful news!  Lucy is a survivor - thank you for everything you did to get her back.

Permalink Reply by Joan on July 8, 2011 at 5:19pm
So happy to hear this news!!! Saw on facebook and almost cried...love the sausage story.